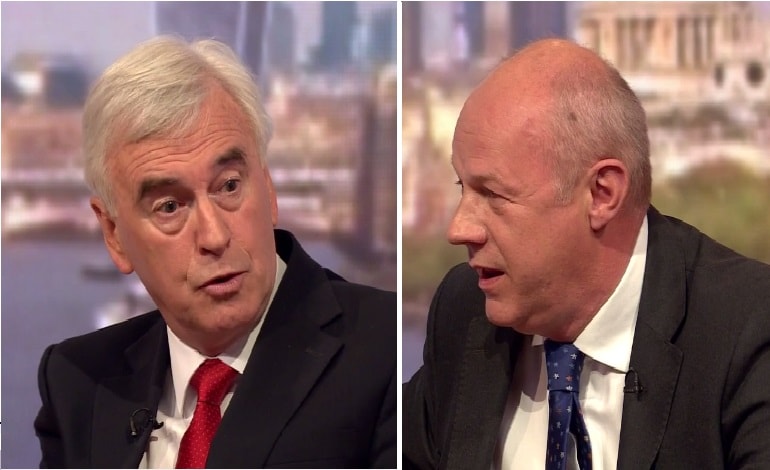 Shadow Chancellor John McDonnell left a Tory minister dumbstruck, after exposing his deepest secret on the Andrew Marr Show. McDonnell and Work and Pensions Secretary Damian Green were arguing about the merits of democratic, public ownership of essential services. Until McDonnell silenced Green with a secret the minister would prefer to keep off the airwaves:

You were an associate director of a company in the water industry while you were an MP. Yes you were and you made quite a profit out of it. £18bn of profits paid out to shareholders during your period when you were there. We’re going to take that money and instead of using it as dividends for shareholders for rich people like you, we’re going to ensure it covers the cost.

Labour wants to bring the water industry back into public control. So money currently going to shareholders is reinvested into a service every person and business needs to survive.

It turns out this Conservative minister was one of those profiting shareholders. While serving as an MP, Green was a non-executive director of Mid-Kent water between 2005 and 2007. After that, he joined South East Water in the same position until 2010.

The Shadow Chancellor also set the record straight when it comes to nationalising essential services. Green was trying to spread the myth that public ownership brings about debt:

Actually, the rail industry wouldn’t cost a penny to nationalise because Labour would [pdf p.19] take them into public control “as their franchises expire”. In other words, Labour just won’t renew the contracts for private companies.

But public ownership of the water industry, for example, would require a one-off payment to shareholders. Still, McDonnell points out it does not cost more in borrowing:

You issue bonds for shares. The income from profitable assets then covers the cost. Simple as that. And it’s been done by government after government.

The Shadow Chancellor made clear that nationalisation of an essential service means acquiring an asset that profits public finances, it does not bring debt. Everyone already pays for water, for example, each time they turn on a tap. Except right now rich shareholders are making huge profits. Remove the profits, and water will become cheaper for everyone.

No doubt upbeat from Labour’s surge in the polls, McDonnell brought a refreshing dose of reality to the Marr Show. He showed exactly why profit hungry Tories like Green oppose democratic ownership of necessary services. How on earth will they make such easy money without them?