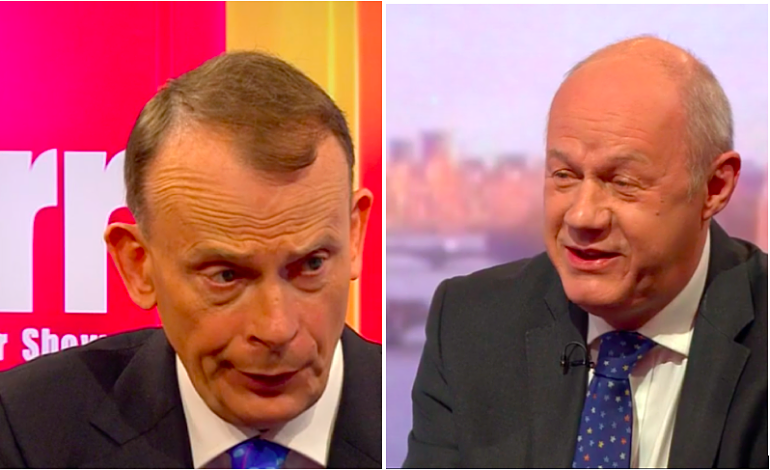 Conservative Work and Pension Secretary Damian Green may have emerged from the BBC studios on Sunday 21 May a little dizzy, having gone several rounds with Andrew Marr. After exposing a number of holes in the Tory manifesto, the impact on proposed new social care costs for pensioners was clearer. And it is evident that the Tories want pensioners and their children to pay for their grand plans.

Where is your money?

Marr set out by pointing to the disproportionate time the Tory party had spent rubbishing the Labour Party’s manifesto and its tax proposals rather than costing up its own manifesto. Marr said:

They [the Labour Party] have given us quite detailed accounts of how much tax they’d raise and from whom. You haven’t. Let me talk if I may of the blackholes in your manifesto. You say you’re going to spend an extra £8bn for the National Health Service. Where is that money coming from?

I’ll tell you where – pensioners

Green’s answer, eventually, took him down a rather uncomfortable rabbit hole:

We are now going to target winter fuel payments on those who really need them and that money can be targeted to the health and social care system.

But how much and at what level Green refused to answer. That’s a question they’ll answer after the election. But Marr pointed out that pensioners will be wondering “If I vote Conservative on June 8 will my winter fuel payment be taken away on June 15”. Adding:

And Green didn’t have any answers when it came to questions about the Conservatives’ ‘dementia tax’.

Social care funding in the UK is currently means-tested. Anyone with assets over £23,250 has to pay for it excluding the value of their house if they are cared for in their own home. But the value of the house may be considered if they move into a care home unless a close relative is still living in the property.

Significantly, the 2015 Conservative manifesto under David Cameron proposed that by 2020 there would be a cap of £72,000 on any social care fees. This meant that for the first time since the Second World War, there would have been a limit on how much people had to pay for their care.

But now Tories are saying that anyone with assets over £100,000, including any property, will have to pay for their care after they die. This means that people who previously were cared for at home, who got help without the cost of their property being taken into account, will now have to pay huge fees

Marr pointed out this discrepancy:

The value of their house if they are being cared for at home is now being classed as an asset.

And Marr used an example of a family in Twickenham to make his point:

An average house there costs £545,000… The chap’s got early-onset dementia. He’s being cared for in his home. He’s got a little bit of money in the bank but not much. Under your proposals they could lose virtually everything. Their children and their grandchildren who were hoping to inherit some of that wealth won’t be able to…

This is a vast secret inheritance tax.

In fact, even the Bow Group, itself a Conservative think tank, has called the proposals the “biggest stealth tax in history”:

It is a tax on death and on inheritance. It will mean that in the end, the government will have taken the lions share of a lifetime earnings in taxes. If enacted, it is likely to represent the biggest stealth tax in history and when people understand that they will be leaving most of their estate to the government, rather than their families, the Conservative Party will experience a dramatic loss of support.

So while the Conservative manifesto reveals very little, Green’s car crash interview does. After paying a lifetime of taxes into a system to help them, pensioners will have to pay again. And so will their children.

The Conservative future is not one that works for the many on modest or average incomes. Rather it only works for the few that have enough wealth for none of this to really matter.