People noticed something missing from the BBC yesterday. So we're publishing it today [VIDEO] - The Canary 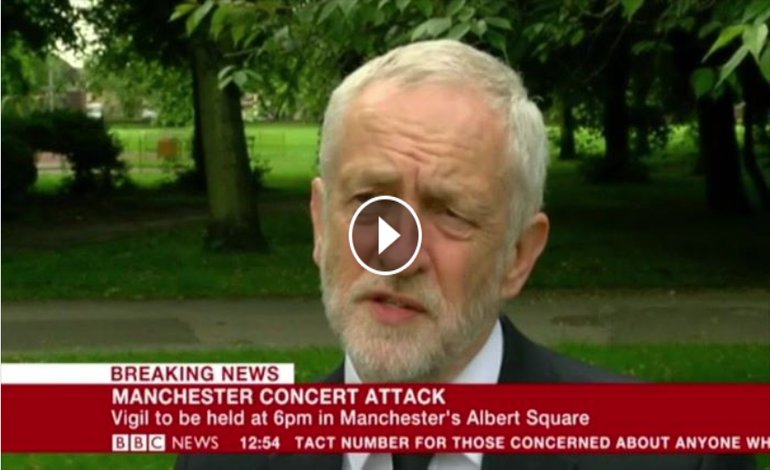 When Labour leader Jeremy Corbyn gave his reaction to the Manchester concert bombing to BBC News, he might have expected most people to have seen it later on the BBC. Instead, most people have watched it on new media sites and social media – because the BBC seemed reluctant to air it.

The Labour leader was asked what message he would send to the families of those killed and injured, and Britain more widely. He said:

There can be nothing worse than losing a child in a situation like this.

We have to put our arms around them and support them. Not just today, but in all the very difficult days to come. Because trauma like this doesn’t go in a day or two. It’s there, with them, for the rest of their lives. We have to give them all the support we possibly can. And also make sure we live in a safe environment in the future, and we live in safety together, but we do not allow our communities to be divided by this kind of appalling, atrocious act of violence.

The compassionate call for love and support was a far cry from the sad behaviour of the UK’s right-wing press; which we are not going to rehearse here as we don’t wish to give it any more air time.

But where did it go?

While Theresa May’s reactions were repeated ad infinitum on the BBC, the Labour leader was notably absent from coverage. As Telegraph journalist Rupert Myers pointed out:

Some might argue: ‘Well, May is the Prime Minister. So what?’

Well, we’re weeks from a general election and opposition leaders had halted their campaigns out of respect for the victims of the Manchester bombing. So there is additional responsibility on the BBC (due to its status as a public broadcaster, and its own impartiality guidelines) to ensure no undue favour is granted to the Prime Minister. Other broadcasters managed this. While ITV and even Sky News had been running responses from all main party leaders throughout the day, the BBC weighed heavily towards the Conservatives.

It is a shame, because Corbyn’s words came like a breath of fresh air amid the chaos of the concert bombing.

The first task we have as citizens is to support each other through this nightmare. To remember our values, and to hold to them unwaveringly. Parents have lost children, brothers have lost sisters. Those injured and bereaved by this bombing have had their worlds torn apart. The rest of us have a duty to hold our world together, and make it a better place for the bereaved and injured to return to from their grief. So be kind today, and be kind every day. Because the world needs more of that.