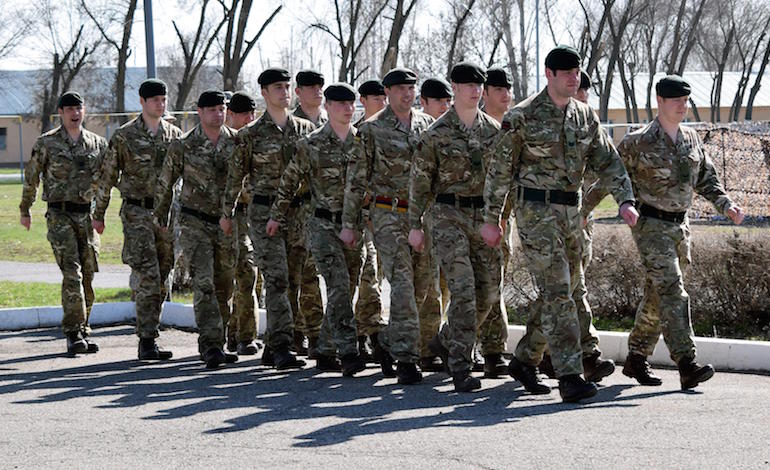 Theresa May has announced that the UK’s terror threat level has been raised from ‘severe’ to ‘critical’ after the bombing of a concert in Manchester, and that she plans to put soldiers on Britain’s streets. Up to 5,000 soldiers will now protect key sites, including Buckingham Palace and Downing Street. But the real reason the Prime Minister has had to take such drastic action is not getting much airtime: under Theresa May, first as Home Secretary and then as Prime Minister, British policing has been brought to its knees by cuts.

“Additional resources” for the police

The Prime Minister made her announcement in a live broadcast on the evening of 23 May:

The UK's terror threat level has been raised from 'severe' to 'critical'. PM @theresa_may explains what this means in her latest address pic.twitter.com/BZzGh7OLtc

In her address, she made clear that raising the threat level meant more resources for the police:

The change in the threat level means that there will be additional resources and support made available to the police as they work to keep us all safe.

As a result of [the Joint Terrorism Analysis Centre’s] decision, the police have asked for authorisation from the Secretary of State for Defence to deploy a number of armed military personnel in support of their armed officers. This request is part of a well-established plan known as Operation Temperer…

The existence of Operation Temperer was accidentally leaked to The Mail on Sunday in 2015. Bringing the armed forces in was seen as a way of boosting police resources in the event of a terrorist attack, as they struggled with cuts. The Mail reported at the time:

Some police leaders fear that the soldiers would be needed if there was a wave of attacks by extremists inspired by Islamic State or Al-Qaeda, as police forces no longer have enough manpower to cope.

Will Riches, Vice-Chair of the Police Federation of England and Wales, said:

The bottom line is you can’t reduce 17,000 police officers and expect nothing to change. While police are well-versed at contingency planning, the levels of cuts to officers means that we cannot police events in the same way.

Our national security must not be put at risk. Theresa May has a responsibility to make sure we have enough police for vital counter-terror work.

Police forces in a “perilous state”

The Conservative government’s austerity programme has inflicted dramatic cuts on police forces across the country since 2010. There are now around 20,000 fewer police officers in the UK than there were in 2009. This, according to Her Majesty’s Inspectorate of Constabulary (HMIC), has left policing in England and Wales in a “potentially perilous state”.

And two days before the attack, a former inspector from Greater Manchester Police told May:

On 24 May, after the attack in Manchester, Police Federation Chair Steve White asked:

Will we learn the lessons of recent events and realise that policing is the job of the police, resources the job of government?

While Labour has pledged to increase police numbers in 43 forces in England and Wales by recruiting an extra 10,000 police officers, the Conservatives have made no such pledge. In fact, under the Conservatives, police staffing levels could reduce by a further 17% by 2020, according to analysis from the Association of Police and Crime Commissioners.

May has overseen drastic cuts to our police forces. As a result, she has now been forced to take drastic action. The armed forces on our streets are not a sign of strength or stability. They’re a symbol of just how desperate things can become when one of the richest countries in the world undertakes ideological cuts to public services on a massive scale.