Here's the evidence that shows who will benefit from Theresa May's dementia tax. And it's not you - Canary 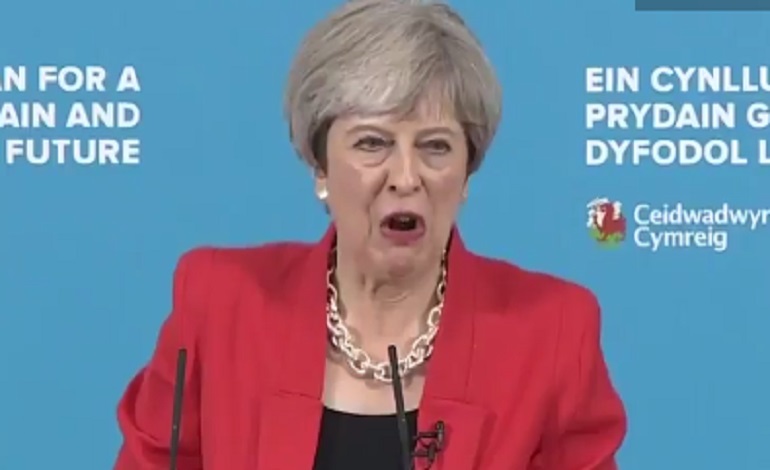 Theresa May’s ‘dementia tax’ has caused a storm since it was first announced in the Conservative Party manifesto on Thursday 18 May. But the evidence suggests that British voters won’t be the main beneficiaries of the policy.

As The Canary previously reported, the PM performed a U-turn on dementia tax on Monday 22 May. Previously, the Conservative manifesto said that, if people had over £100,000 in assets (including property), they would have to take out a form of equity release, lifetime mortgage or other financial policy. This is so payments for social care could be secured against the value of their estate. The money would then be recovered on the person’s death, or when they sold their property.

May announced her U-turn in Wales, claiming that Corbyn and the Labour Party were spreading “fake claims, fear, and scare-mongering”. She stated:

So I want to make a further point clear. This manifesto says that we will come forward with a consultation paper, a government green paper. And that consultation will include an absolute limit on the amount people have to pay for their care costs.

This crucial detail was entirely omitted [pdf] from the Conservatives’ manifesto. But one website has suggested there may be something else behind this policy.

Vox Political wrote on Sunday 21 May:

Here’s an interesting possibility, mentioned today by a commenter to This Site: ‘The other commercial opportunity: the dementia tax is a stealth incentive to take out equity release mortgages.’

And after a reader also got in touch with us, The Canary decided to look into it further. Here’s what we found.

The previous Coalition government commissioned Sir Andrew Dilnot to do a review of social care in England. Aside from concluding that there should be a cap [pdf p6] on the total cost of care, and that those with life-long support needs should be given free [pdf p6] care, it said [pdf p40]:

At the moment, no major financial services providers offer pre-funded insurance against social care costs. This means people are not able to protect themselves in advance of having a care need. There are some specific products… such as equity release and immediate-needs annuities…

The roots of the dementia tax

So in January 2014, the government and the Association of British Insurers (ABI) launched [pdf] a ‘statement of intent’. The thrust of this was [pdf] to “help people plan and prepare for the costs of their long term care”. This statement coincided with the Care Act 2014, which made local authorities legally responsible for:

The ABI said it was “disappointed” that it hadn’t seen in law “a stronger requirement… on local authorities to actively help and direct self-funders to a regulated financial adviser”.

But still, the Act essentially turned councils into sales executives for the insurance and financial services industries. And one such insurance company was Legal & General (L&G), which at the time was a member of the ABI with its Chief Executive sitting on the board.

In June 2015, L&G launched its Lifetime Mortgage product, with a view to becoming “a leading provider” of these products. The mortgages allow people to:

release much needed funds to provide for their retirement, particularly as people are now living longer, the cost of later life care is growing and property values continue to rise in real terms…

Then, after the EU referendum, L&G released a statement on the Brexit vote. Aside from noting that it would be “substantially unaffected by the EU Referendum result”, it said that:

Note “ageing populations” and “welfare reform”. Two areas which would both affect L&G’s goal of becoming a “leading provider” of Lifetime Mortgages. Because later in 2016, there was a shake-up in two government departments relating to both these areas.

Clowns to the left of me…

In July 2016, May appointed John Godfrey as her Number 10 Director of Policy. He was previously Director of Corporate Affairs for L&G. But as The Times noted [paywall]:

he has been in charge of L&G’s well respected corporate and social responsibly programme around financial inclusion and housing — key areas for Mrs May.

One of the “goals” L&G set for its Financial Inclusion arm was to “reach and engage over 1 million people in the UK with financial education content”. Which in layman’s terms means promoting its products to the public, under the guise of education. But The Times also said [paywall]:

his role at L&G has also included lobbying ministers on behalf of the insurance company, leading to renewed concerns about the revolving door between lobbyists and political advisers.

Jokers to the right…

This “revolving door” continued to be wide open in 2016, as senior Treasury official John Kingman left the department to become Chairman of L&G. His previous role at the Treasury related to “financial services”. But Kingman is also an advocate of “supply-side” policies within government; that is, promoting ideas that increase private capital investment, cut taxes and regulation, and support free markets and competition. He was also responsible for the bank bailouts after the 2008 financial crisis.

But neither of these examples would be the first time L&G had influence over government policy. As the website Property 118 noted:

In late 2016, L&G Group Chief Executive Nigel Wilson was commissioned by the government to compile a “Mission-led Business Review”. By March 2017, L&G was the market leader in Lifetime Mortgages and equity release plans, holding a 29% share. Then, also in March, the Tories appointed the CEO of L&G’s Investment Management arm, Mark Zinkula, to the board of the UK corporate governance watchdog, the Financial Reporting Council. Fast forward to 18 May, and the Conservative manifesto stated [pdf p67] that:

the value of the family home will be taken into account along with other assets and income… we will extend the current freedom to defer payments for residential care to those receiving care at home, so no-one will have to sell their home in their lifetime to pay for care.

The unanswered question at the moment is how will this work in practice? If the Conservatives encourage more people to turn to the open market then equity release providers could benefit.

As The Telegraph reported on 20 May, the PM allegedly did not consult with any senior politicians over the party’s social care plans:

A series of social care policies were due to be put out to consultation this summer, including some of those adopted by the party in its manifesto. However the changes would have been followed by months of consideration with less political risk if they were dropped or altered after industry feedback. The failure to consult widely the small group of Number 10 figures who drew up the manifesto is cited in discussions about criticism of some to the measures.

Is this because May had all the consultation she needed from her insider friends at L&G? Possibly. But this story raises, once again, the wider issue of political lobbying.

Not only do you have ex-L&G lobbyist Godfrey sat at the PM’s top table, but one of its Non-Executive Directors (NED), Richard Meddings, works for the Treasury. Rudy Markham, another NED, worked for the Foreign Office until 2015. Another NED, Lesley Knox, was a member of Reform, the right-wing free market thinktank described as part of “the conservative movement’s… infrastructure”.

Then there are the Conservative peers who are L&G shareholders: Lord Hamilton; Lord Nash (former Chairman of private healthcare company Care UK and member of the Independent Challenge Group thinktank, which pushes for “efficiency savings” in social care); and Lord Patten.

The creep of corporatism

L&G is the seventh most powerful corporation on the planet. And for the Conservatives to so openly allow its influence to creep into Westminster is unsurprising. But it would appear that the ‘dementia tax’ policy is part of a wider assault on social care, with deep-rooted seeds planted years ago. With a view to everyone having to pay privately, thus stripping both the financial and social responsibility from the state. And financially benefiting huge corporations like L&G.

The situation is perhaps best summed up [paywall] by Tamasin Cave’s view, from the Alliance for Lobbying Transparency, on Godfrey being appointed to Number 10:

If I was L&G I would be rubbing my hands in glee that their man has been taken into the heart of No 10. It’s not too much of a surprise though as this is a government head to toe full of former lobbyists.

Oh, and the PM’s now-famous husband Philip? His company, Capital Group, is a shareholder in L&G. There is no government ‘for the many’ when it comes to the Conservatives. Just one for ‘the few’; namely them and their mates in the City.