It’s official. The only way we can save our schools is to get rid of the Tories - Canary 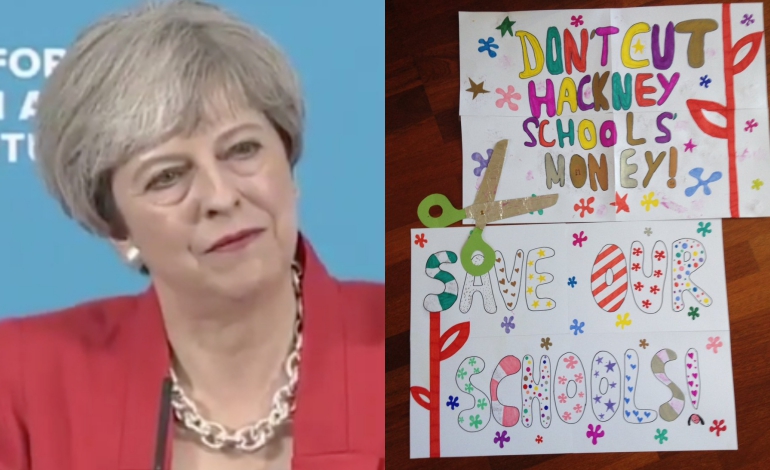 The Conservative Party is failing schools in England. And things will only get worse if the party is re-elected. These are the findings of the Institute for Fiscal Studies (IFS). Not only does this back up what teachers have been saying across the country, it also sends a clear message: if we want to save our schools, we have to get rid of the Tories.

Headteachers have been arguing that real term funding for schools is being slashed. This has led to increased class sizes, teacher redundancies and the slashing of vital support services such as counselling support.

But the picture is even bleaker if Theresa May is elected on 8 June. According to the IFS, funding per pupil will be cut by as much as 7% by 2022:

And these calculations mean that either May lied in the Conservatives’ manifesto. Or, best case scenario, it is another example of where the party has got its figures hopeless wrong. May stated:

We will increase the overall schools budget by £4bn by 2022, representing more than a real-terms increase for every year of the parliament.

But given the IFS analysis, this simply isn’t true. And it comes just days after the Conservatives had to backtrack from its figures abolishing school dinners and replacing them with breakfasts. Figures revealed that the party had only set aside 7p per child for breakfast.

Jeremy Corbyn is offering an alternative for our children’s education. According to the IFS, schools would receive an extra £500 per pupil per year under Labour. Luke Sibieta, one of the authors of the report said:

Labour plans include introducing a National Education Service that will invest £25bn into schools. This means reducing class sizes for infants, free school dinners for all primary school children, giving teachers more control over the curriculum, and ending the public sector pay cap.

Nothing could be clearer

We live in a country where even an outstanding rated academy was forced to send a begging letter to parents over school funding. Cuts are so bad that there is a national day of action against school cuts with #schoolsjustwannahavefunds trending on Twitter:

But now it isn’t just parents and teachers saying this. The IFS agrees. The promises set out in the Conservatives’ manifesto will see a fall of 7% in funding by 2020. And given the impact of cuts already seen, these extra cuts will be catastrophic.

So, there’s a clear choice. Think about education when you enter the ballot box on 8 June. And remember these figures. The Tories’ are destroying our children’s schools. And they are set to make things even worse. Vote for our kids. And let’s get rid of the Tories and give our children a fighting chance of a better future.