It happened! Karma has finally come to bite Katie Hopkins right in the arse [VIDEO] 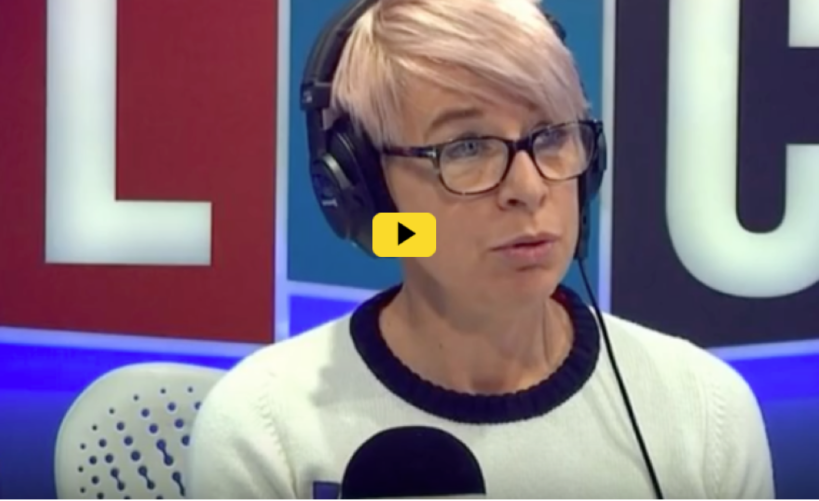 Years of hate-mongering have finally come back to bite shock-jock Katie Hopkins right in the arse. LBC radio has confirmed that Hopkins’ position with the station has been terminated with immediate effect.

Who the f*ck is Katie Hopkins?

Katie Hopkins is a trollumnist. Paid by the likes of The Sun and The Daily Mail to troll decent people by defiling even the most basic tenets of human civility. She has helped to import the US far-right insult ‘precious snowflake’ to describe anyone with a functioning conscience. And she loves to tell others to put on their ‘big girl pants’.

She was unmoved when scores of war-fleeing refugee families began drowning in the Mediterranean as their flimsy escape vessels sank. She claimed she didn’t care about the “coffins and bodies floating in water”, writing:

Make no mistake, these migrants are cockroaches. They might look a bit like ‘Bob Geldof’s Ethiopia circa 1984’ but they are built to survive a nuclear bomb.

Once gunships have driven them back to their shores, boats need to be confiscated and burned on a huge bonfire.

And we won’t rehash her other grim commentaries on the issues of the day. But finally, karma came calling.

Hopkins has enjoyed a lucrative platform on LBC radio. An example of her behaviour on that show is in the video below:

But in the wake of the Manchester concert bombing, Hopkins finally faced the consequences of her actions. 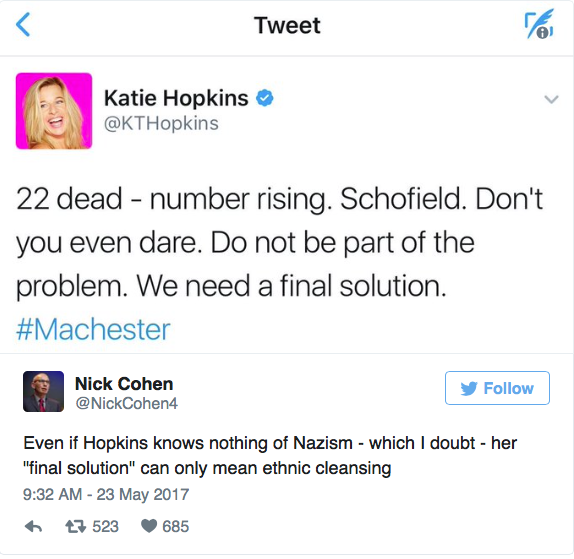 Calls for her dismissal from LBC radio came thick and fast. As The Independent reports:

Complaints were made to the Metropolitan Police about Hopkins’ tweet, which she later said she stood by, but claimed the use of “final” was a typo, changing it to “true” in a new tweet.

And on Friday morning, LBC confirmed that Hopkins would not appear on their station again.

LBC and Katie Hopkins have agreed that Katie will leave LBC effective immediately.

Those who Hopkins has vilified over the years – migrants, welfare claimants, single mothers, disabled people and others – will not be sorry to see her go. And countless LBC radio listeners and other UK citizens will also be glad to see the back of her. We only hope that more outlets refuse platforms for such divisive pundits to abuse marginalised and vulnerable communities. Bye bye Hopkins. Don’t let the door hit your arse on the way out.