May sent a top Tory to smooth things out on TV. But Labour’s Thornberry gatecrashed the interview [VIDEO] - The Canary 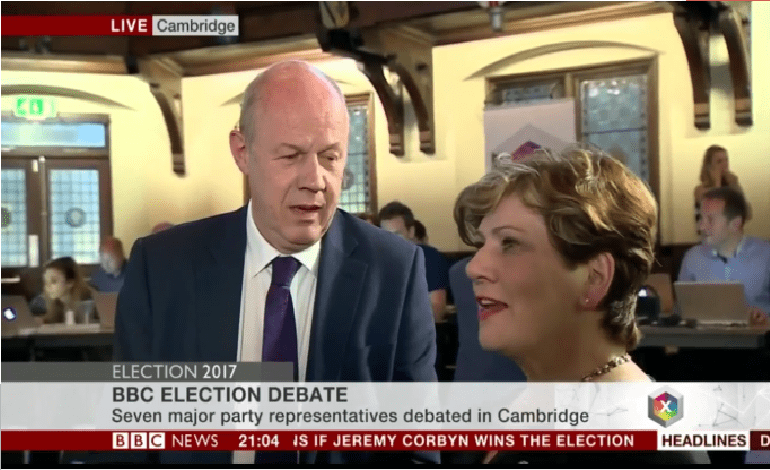 After avoiding the 31 May BBC leaders’ debate, Theresa May sent a top Tory to smooth things out. But it didn’t quite go as planned. Mainly because Labour’s Emily Thornberry gatecrashed the interview.

Given that May didn’t turn up, one social media user summed up how many voters are feeling:

After the debate, Work and Pensions Secretary Damian Green was trying to downplay May’s absence on television.

Green branded the claim that May doesn’t care about voters “completely ridiculous”. He then tried to distract people with the usual soundbites:

So that was the ‘coalition of chaos’ made flesh. That is what a Jeremy Corbyn-led government would look like.

If she can’t get out and debate, how the hell can she be saying to the British public that she can negotiate? Why is she such a coward?

In the real world, the Conservative leader has run a carefully stage-managed campaign. Sky News political correspondent Beth Rigby called it “the most controlled election campaign” she’d ever seen. And even a political correspondent from The Sun said Corbyn’s campaign was “refreshing” because of how readily he took questions from journalists. In Cornwall, meanwhile, local paper Cornwall Live reported earlier in the Tory campaign that:

Back on the BBC, Thornberry cut through again:

What we saw tonight was a Conservative Prime Minister hiding from the British people, and not being prepared to come out and answer questions in the way that Jeremy Corbyn did.

Thornberry then took aim at Green for his party’s uncosted manifesto, saying:

We have a fully costed manifesto… How many numbers are there in your manifesto, apart from page numbers?

The Conservative minister then tried to misrepresent Labour on public ownership. He claimed:

It doesn’t include any money at all to buy the energy industry, to buy the railways, to buy the national grid, to buy the water industry. All of that, you say: ‘Oh, that’ll come from borrowing. But it doesn’t count as borrowing because we’ll be able to pay the borrowing back.’ That is the most economically illiterate thing any major party has put forward, probably since Labour’s 1983 manifesto.

For starters, the rail industry wouldn’t cost a penny to nationalise, because Labour would [pdf p19] take them into public control “as their franchises expire”. In other words, Labour just won’t renew the contracts for private companies. And Labour isn’t nationalising the energy industry, but is planning to create local, public, renewable energy firms.

Earlier in May, on the BBC, Shadow Chancellor John McDonnell made clear that nationalisation of an essential service means acquiring an asset that profits public finances and does not bring debt. Everyone already pays for water, for example, each time they turn on a tap. McDonnell points out that, right now, rich shareholders are making huge profits. Remove those profits, and water will become cheaper for everyone.

With that in mind, Thornberry said to Green:

For every pound we put in, we increase the economy.

Green may have gone on the BBC to smooth things over. But the plan didn’t go very well. Thornberry gatecrashed the interview and branded the sitting Prime Minister a “coward”. That’s got to hurt.