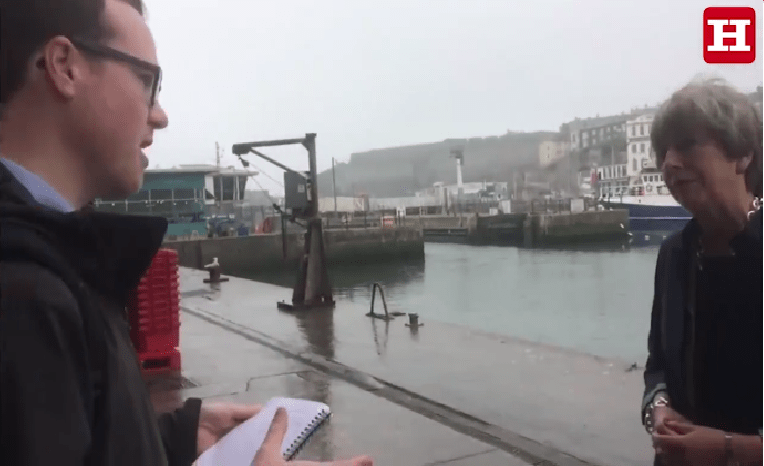 Jeremy Corbyn decided to participate in the BBC debate himself on 31 May, piling pressure on Theresa May to join him. But the Conservative leader’s car crash performance in Plymouth earlier that same day made certain the answer would remain ‘no’. A cringeworthy interview with The Plymouth Herald compounded a campaign so abysmal that even Conservative candidates have branded it a “cluster fuck”.

Plymouth Herald reporter Sam Blackledge gave a telling verdict on his exchange with May:

Before 8.30am today, I had never interviewed a Prime Minister. Heading back to the office to transcribe my encounter with Theresa May at Plymouth’s fish market, I couldn’t be certain that had changed.

The local paper summed up the interview as “three minutes of nothing” and “without clarity, candour, or transparency”.

Meanwhile, Guardian journalist Owen Jones warns, “if you don’t want to cringe so hard you’ll end up in another dimension do not look at this interview”:

The Plymouth Herald reported that the Conservative leader’s visit was kept “totally secret” until her arrival. And this shying away from voters is indicative of May’s wider strategy. Sky News political correspondent Beth Rigby called May’s election campaign “the most controlled” one that she’d ever seen.

The local paper also described the initial reaction of the Conservative campaign team:

Tired-looking campaign managers hurried back and forth, mulling over our request for a filmed interview which had been denied on her previous visit.

Then, The Herald reports, “suddenly we were on”. But May only responded to each Plymouth-focused question with a vaguely related empty platitude. The local paper summarised the interview as follows (numbers added by The Canary):

1) Two visits in six weeks to one of the country’s most marginal constituencies – is she getting worried?

‘I’m very clear that this is a crucial election for this country.’

2) Plymouth is feeling the effects of military cuts. Will she guarantee to protect the city from further pain?

‘I’m very clear that Plymouth has a proud record of connection with the armed forces.’

3) How will your Brexit plan make Plymouth better off?

‘I think there is a better future ahead for Plymouth and for the whole of the UK.’

4) Will you promise to sort out our transport links?

‘I’m very clear that connectivity is hugely important for Plymouth and the South West generally.’

In her interview in Plymouth, the sitting Prime Minister seemed to prove yet again that she is incapable of thinking on her feet. No matter the question, only meaningless soundbites appeared to follow. That certainly would not have cut the mustard live on the BBC debate with the other party leaders. So it’s no wonder Conservative strategists kept her away from the broadcasted debate. It may well have been even more damaging than the blend of weakness and arrogance displayed by not showing up.