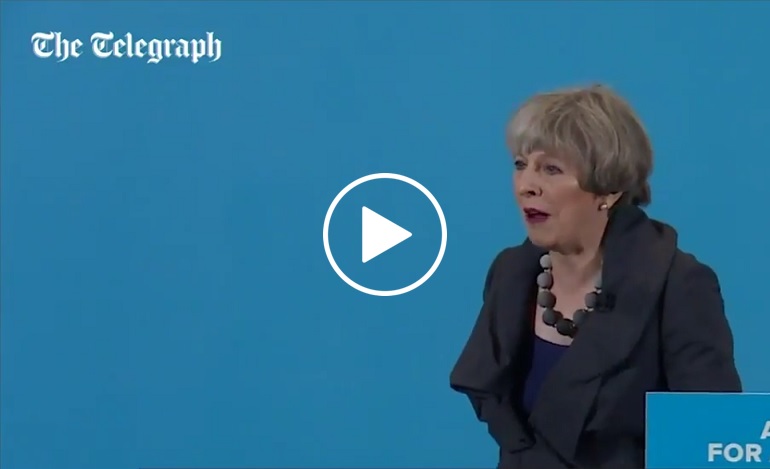 Theresa May has long frustrated many of us with her failure to engage in open debate and to answer journalists’ questions. But now, even The Telegraph is starting to lose its patience with her.

‘A masterclass in dodging questions’

On 1 June, The Telegraph‘s Twitter account released a video called “Theresa May masterclass: how to dodge journalists’ questions”. The footage showed a journalist asking the Conservative leader:

Isn’t the reason that you’re doing so badly… that whenever people ask you about policy, what we get are clichés and platitudes? You mentioned the £8bn for the health service. You mentioned managing money. Where is the £8bn coming from?

And clichés and platitudes were precisely how May avoided answering this question. Not exactly comforting for voters, considering that most of the numbers in the Tory manifesto are page numbers.

The Telegraph also looked at a few more questions that May failed to answer:

A masterclass in how to dodge questions, by Theresa May pic.twitter.com/V3ZRHmHmOH

It’s important to remember here that The Telegraph has been publicly freaking out about Jeremy Corbyn’s leadership of the Labour Party, and defending the Conservative Party at almost every opportunity. With this in mind, the paper mocking May’s failure to answer journalists’ questions is quite something.

But it’s not only The Telegraph showing its frustration with May’s media strategy. On 31 May, for example, The Plymouth Herald described an interview with the Tory leader as “three minutes of nothing”, “without clarity, candour, or transparency”. A growing number of right-wing media outlets, meanwhile, have also begun to show impatience with May’s tactics, in what Sky News has called one of “the most controlled” campaigns ever.

May’s team has also reportedly locked journalists in a room and banned them from filming. And the Tory leader has even been accused of trying to control reporters’ questions. This is in addition, of course, to her now solid reputation of not answering questions:

This is what one journo said after @theresa_may's #Brexit campaign speech.
"Strong yet Unable" hey @Conservatives 😂 pic.twitter.com/yvGvuVBIOW

Now compare May’s campaign with that of Jeremy Corbyn. A politician who has consistently sought to answer questions, even when they have little relation to Labour Party policy. Like this one, for example:

Huge admiration for Emily Thornberry. Along with Butler Gardiner & Prescott she's been a firewall for Jeremy in 2017 pic.twitter.com/LYDBwZ7By0

And while Corbyn’s team may not always believe the media’s questions are relevant or appropriate, they’ve made their support for a free press clear. As Shadow Foreign Secretary Emily Thornberry said on 1 June:

We all agree that we should have a free press. They’re allowed to ask questions, no matter how stupid… and shouldn’t be booed.

Emily Thornberry calms the audience after a question about Sinn Fein and says journalists are allowed to ask stupid questions #GE2017 pic.twitter.com/OoqkcwJe5U

And speaking of respecting the press, Corbyn has insisted (even on one of his worst days with the media):

If you don’t like what a reporter says or asks of me… we will all do our best to answer those questions. But under no circumstances whatsoever should anyone throw personal abuse at anyone else because they’re doing the job that they’ve been employed to do.

Who do we want representing us?

According to Corbyn’s team, Theresa May’s avoidance tactics say a lot about how she would perform in Brexit negotiations. As Emily Thornberry said on 31 May:

If she can’t get out and debate, how the hell can she be saying to the British public that she can negotiate?

For Corbyn, figures like Thornberry are much more likely to do well in Brexit talks. On 1 June, he asked:

Who better to negotiate for us than calm, sensible, intelligent, rational individuals?

And some members of the public seem to agree:

Tories: You like your women leaders strong, bolshy, a bit politically incorrect? Well, since May isn't working, what about @EmilyThornberry?

When even right-wing media outlets like The Telegraph are jumping to criticise May’s inability to respond positively to scrutiny with honest answers, we know the Tory leader is doing something very wrong. And indeed, she’s appearing increasingly weak and wobbly as we close in on election day. Her opponents, meanwhile, are looking more and more like the strong and stable ones.