The Brexit Secretary makes a critical error of judgement on TV, leading to an absolute roasting [VIDEO] - Canary 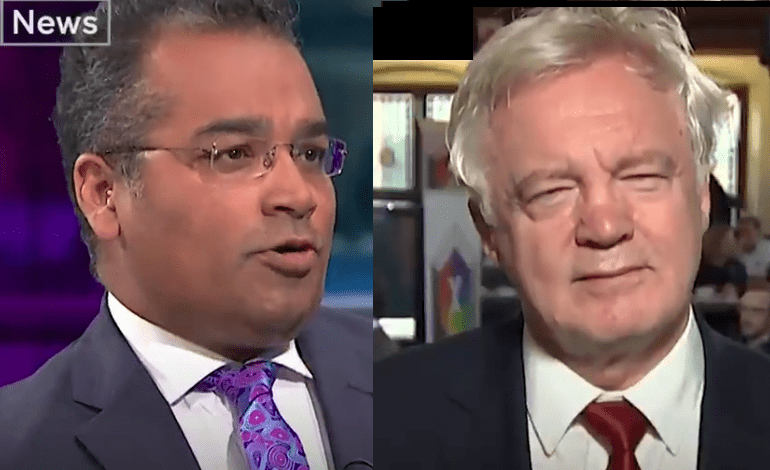 Brexit Secretary David Davis made a critical error of judgement on Channel 4, which led to an absolute roasting. Interviewer Krishnan Guru-Murthy was challenging Davis on Theresa May lying about Labour’s immigration policy. Feeling the heat, Davis decided that insulting Guru-Murthy was the best course of action:

If you ask a question, you should wait for the answer. That’s one of the reasons that you bring these debates into disrepute.

But Davis should be careful with attacking his interviewer on such grounds. Given the Conservatives’ own record, the minister left himself wide open. And Guru-Murthy let rip:

I’ll tell you what brings politics and debate into disrepute. It’s political lying… Like Theresa May saying Jeremy Corbyn is in favour of uncontrolled immigration, when his manifesto clearly talks about managed migration. Or saying you’re not going to hold an election, when you then have one. Or saying you’re not performing a U-turn on social care when you clearly are. That’s what brings politics into disrepute, isn’t it? And then not turning up to a debate.

Guru-Murthy initially challenged Davis on a smear campaign born in The Daily Mail and The Telegraph. On 31 May, both ran front-page stories about Labour’s apparent ‘secret plans’ to increase unskilled immigration. And Conservative politicians like Davis used the ‘scoop’ to attack the opposition.

But LBC‘s James O’Brien was among those setting the record straight:

It’s not even a policy. It’s not even in the party manifesto. And it’s not even a tiny bit different from what the government received as advice from their top immigration adviser last year.

It turns out that the Conservatives and sections of the media are actually attacking a phantom Labour Party once again.

Lacking in anything of substance, Conservative politicians and pundits keep attacking an imaginary high-tax, high immigration Labour of a right-winger’s nightmare. In other words, they have no legitimate criticisms of Labour’s actual policy platform.

Given this context, Davis made a critical error of judgement by attacking Guru-Murthy for bringing politics into disrepute. From Zac Goldsmith’s racist London mayoral campaign, to disgracefully smearing Corbyn, it’s the Conservatives who are the masters of below the belt, personality politics. If anyone’s bringing politics into disrepute, it’s the party of privilege.