Another day, another police representative accusing the Tories of misleading the public - Canary Workers’ Co-op 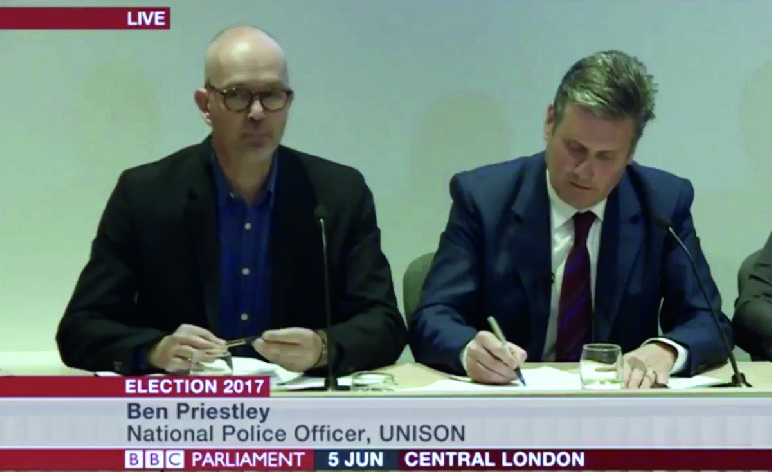 On Monday 5 June, Shadow Brexit Secretary Keir Starmer held a press conference with six union representatives. One of them was Ben Priestley from Unison. He was there representing civilian police staff outside London. And he became the latest person to accuse Theresa May’s government of misleading the public.

I think one of the issues that we’re most concerned about following on from those cuts has been an increase in crime that we’ve seen in England and Wales since 2012/13. And this is something which the government has sought to avoid, but we think there is a connection, there’s an analysis, [on] what the public will be doing in relation to these figures. And some of those figures are truly, truly shocking.

Now, if those figures weren’t shocking enough, this government, which has claimed repeatedly, and also claimed in its Conservative Party manifesto, that crime is falling. But nothing could actually be further from the truth. The government relies on the crime survey for England and Wales, which is an opinion poll, which disregards homicide; it disregards sexual offences; it disregards crimes against business. It is a very very small proportion of overall crime.

So the government relies on those figures to tell the electorate that crime is falling. Whereas recorded crime figures tell exactly the opposite story.

Now I’ll return to the issue of policing cuts, and the effect that’s had on our members’ ability to police the work places, and the places that they are overseeing. And I think the most worrying aspect of that is if you look at the 37% – 38% decline in PCSOs [police community support officers], they now say they are no longer able to gather that important intelligence on a day-to-day basis about criminal, and potentially terrorist activity, in the communities that they are policing.

DEVASTATING: Ben Priestley explains how the crime stats are being fiddled. Police numbers are being cut + books are being cooked. #ToriesOut pic.twitter.com/pfyBkUooZY

Mark Serwotka of the Public and Commercial Services union was at the conference representing PCSOs. He said in regards to recent terror attacks:

Nobody here will say: ‘If it wasn’t for this cut, that wouldn’t have happened.’ It would be folly to say so. But what we can say is that the figures speak for themselves and questions need to be asked – you need to put resources in to continually keep people safe.

It would be a dereliction of duty if those people representing frontline workers did not get the message across that the swingeing cuts that took place under Theresa May’s watch are having a very real impact.

Priestley said on the same matter:

We’re all sensitive to the victims and their families and friends. But it must be right that we are able to examine what the impact of the cuts has been,” he said.

Our members have been trying to get that story across for a long, long time. It’s a real shame it’s taken these events to throw some of these cuts into relief, but I think that debate has got to happen.

There are more worrying revelations in the following videos:

Tory trolls will hate this. If they think ignoring real dangers to our safety is respecting those affected, they're just plain wrong. pic.twitter.com/iro5fjQR6G

Mark Serwotka and Ben Priestley destroy the myth that cutting Police numbers have no effect on security. Devastating. pic.twitter.com/6RXQFrz8JX

The past few months have shown that, although Britain’s people are strong and resilient, the country is also vulnerable. We rely on security sources to protect us, and to one degree or another we put our trust in them. So it’s of grave concern that the people we need to trust are telling us we can’t trust the government.