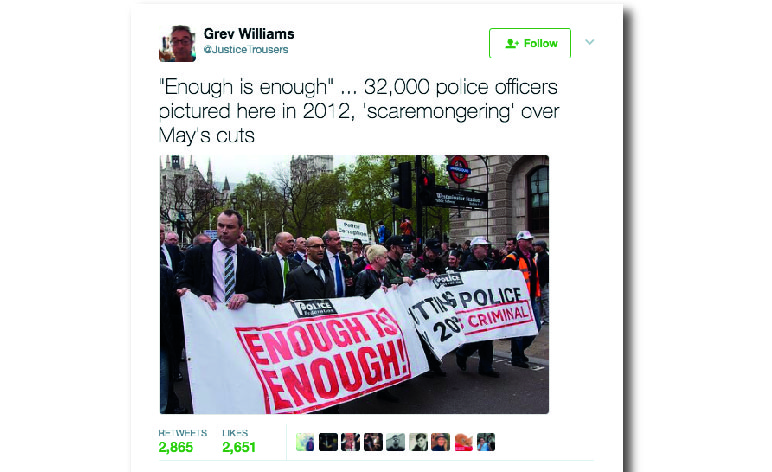 On 4 June, Theresa May responded to the London Bridge terror attack by saying “enough is enough”. But she has since come in for criticism regarding her record, as she was the Home Secretary between 2010-2016. And among others, a former Senior Investigation Officer of the Metropolitan Police has criticised the police cuts she enforced.

What’s also emerged is that not only has May been warned about cuts, but that the police’s warning echoed her own. Because they told her what she herself has now said. And they’ve been saying it since 2012. That “enough is enough”.

The police were saying “enough is enough” in 2012 because of 20% cuts to police numbers. They protested against these cuts because it is illegal for police officers to strike. Theresa May was Home Secretary at the time. You can see images of those protests here.

A sergeant at the time told the BBC that his squad:

only deal with crime 40% of their time. The other 60% of the time we are dealing with other agencies’ work – the NHS, social services, marriage guidance if we’re going to people’s homes to sort out a domestic.

We are the backstop for everyone else – but we don’t have a backstop. If a job is passed to us, we deal with it. That’s what we do and we accept that.

That was in 2012. On 4 June 2017, former Senior Investigation Officer Peter Kirkham told Sky News that:

The Police Federation told May in 2015 that cuts meant they may not be able to respond to a major attack on UK soil. May responded by saying:

May responsible for the attacks?

David Cameron’s former policy chief Steve Hilton, meanwhile, called for May to resign over the attacks. He said:

And journalist Paul Mason responded to Hilton’s call for her to resign in the following way:

Now I think that’s going a bit far. I don’t think we should be trying to politicise this too much, although the police numbers issue is a problem. What we’re seeing is a change in the nature of the threat. Islamist jihadism is changing and morphing, and the tempo of its attacks on us is increasing. So we clearly need to change something, but we need a calm debate about how to do that. One thing we do need to do is stop appeasing the terror-supporters from the Middle East. Which even today Saudi Arabia and Qatar [are] accusing each other of supporting ISIS. And yet we’re giving them weapons. And we are effectively supporting those regimes.

That’s number one. Number two, yes we need to spend a lot more money on policing, on defence, and on counter-terror. And there’s only one party in this election that has said these things, and that is Labour, and that is Jeremy Corbyn. And as for shooting the terrorists, Corbyn said very clearly on Sunday night ‘we’re going to shoot them’ if they are found, like they were, threatening people’s lives.

So I don’t want Theresa May to resign. I want us to calmly, and purposefully, and without malice – without trying to make this a big finger-pointing exercise – I just want us to vote her out.

Cameron's strategy guru Steve Hilton calls on @theresa_may to resign over terror failures. I say: just vote her out. Here's why. pic.twitter.com/R20yCJUjIF

May faced tough questions on Monday 5 June regarding her record of enforcing cuts on the police. She claimed to have given the police what they need, but her response is at odds with what the police are saying about her (and what the police have always said about her). And on 8 June, people will have a chance to decide if “enough is enough” when it comes to May and her handling of UK security.

– You can also discuss the key policy issues with family members, colleagues and neighbours. And organise! Join (and participate in the activities of) a union, an activist group, and/or a political party.