Theresa May should not be Prime Minister. She said so herself. - The Canary 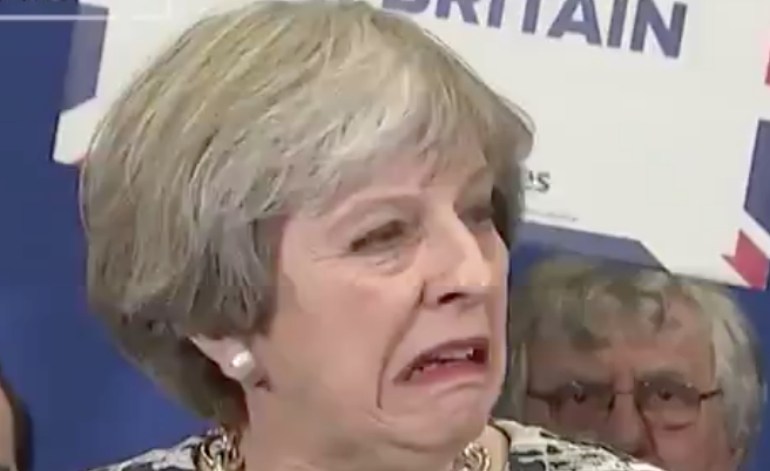 Theresa May should no longer be Prime Minister. And any government she forms does not hold any legitimacy.

That’s according to, well, Theresa May.

Moreover, Corbyn should now be in No 10:

If I lose just six seats I will lose this election and Jeremy Corbyn will be sitting down to negotiate with Europe: https://t.co/OwbfDseOJh

But May didn’t just lose six seats. She lost 12. Including Conservative strongholds like Canterbury.

May repeated her six-seat claim on several occasions:

Theresa May promised again and again that if she lost six seats, Jeremy Corbyn would be PM. Last night she lost at least 12. pic.twitter.com/I3FSLu6AEt

But despite stating so many times that “Jeremy Corbyn would be PM” if she lost, she’s done yet another U-turn and made a desperate dash for power. And it’s a dash for power that involves getting into bed with anti-abortion, homophobic, climate change deniers with “strong historical links with Loyalist paramilitary groups” which have been involved in acts of terrorism.

This means Theresa May either lied or was scaremongering during the campaign. Or she’s subverting democracy. Neither is a good look for a PM.

And as Channel 4‘s Jon Snow pointed out:

Mrs May calls an election the UK didn't need: Loses it, and stays in opower: just politics? or snubbing the democratic will of the people?

Let June be the end of May

But May’s ‘coalition of chaos’ is on shaky ground. As is her own premiership. Her party is turning on her. She chose this election from a position of arrogance based on polling and thought she would gain a mandate to do whatever she wanted. This is in tatters. As is any shred of credibility she had left.

May’s whole campaign pitch was based on “strong and stable” leadership and a mandate for a strong hand in the Brexit negotiations. Instead, she’s lost seats and is clinging onto power with a party which is opposed to the “hard Brexit” that she called the election over in the first place.

All over the country, young and old have turned out to say they want to do things differently. The massive swing to Jeremy Corbyn’s Labour is a clear sign that many people want an end to austerity. And they want our NHS and schools to be properly funded and our pensioners protected.

May might have seized control. But we have to ensure this is only temporary. The politics of hope is triumphing and we need to keep pushing this agenda. As May herself said, Corbyn should be in Downing Street now. Let’s do all we can to make that a reality.