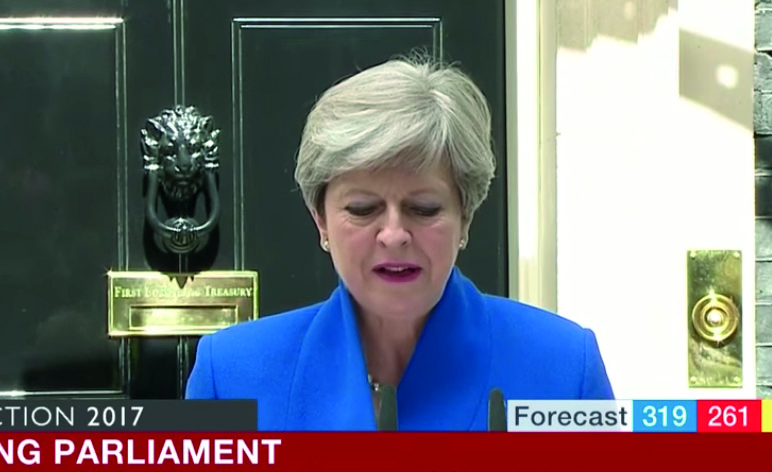 Members of the public are calling on Conservative MPs to oppose any alliance with the DUP.

On 9 June, Theresa May claimed the Conservatives would “work with” the Democratic Unionist Party (DUP). The DUP then said that there was no ‘firm agreement’. But it did say it was willing to form a government without a formal coalition deal.

If an alliance does form, the Conservative Party will combine its 318 seats with the DUP’s 10 – taking them over the 326 needed for a majority. With such a small majority, the issue will be that the Conservatives will struggle to pass anything on which there isn’t a broad consensus. This could prove especially problematic as this election was theoretically about giving May an increased mandate to better negotiate Brexit. And doubly so as the DUP’s soft-Brexit stance does not line up with that of many MPs in May’s own party.

The other issue is that the DUP has some troubling views. Views that include being against abortion, LGBTQ+ rights, and the scientific consensus on climate change. Which will again put them at odds with many Conservative MPs. And it’s this friction within the Tory Party that people are hoping to play upon – by attempting to create a coalition between concerned voters and nervous Conservative MPs. Because if this government fails, the legacy of working with the DUP could toxify MPs seeking re-election.

One Twitter user has written an example letter for anyone who lives in a Conservative constituency:

Unfortunately I'm currently living in a Conservative constituency, so I just emailed my MP- please do the same if it applies pic.twitter.com/FnCY0xmpdU

The message in full reads:

I strongly oppose an alliance with the DUP

As one of your constituents, I’m writing to express my outrage at the suggestion that your party is prepared to cooperate with the DUP in order to remain in government. I know that this election result was surprising for all of us, and there is no clear or easy solution without an outright majority for any one party, but I am shocked and appalled that the Conservatives are willing to partner with a party that holds such extreme views that are damaging to so many people.

For instance, despite many absences on your voting record, it shows that you generally support equal rights for the LGBT community, on issues such as same-sex marriage amongst others. Here is a list of DUP stances, in case you need a reminder:

There are many other issues with the DUP, and I am also concerned as to what this alliance would mean for so many Northern Ireland and Republic of Ireland citizens (our close allies), especially when entering Brexit negotiations.

Please explain how you intend to oppose this coalition, as it is of immediate concern to myself and many of your constituents.

If you intend to write to your MP, the best thing you can do is research them and plan out your letter in a way that speaks to their interests. You can find your local MP using this link.

There is also a petition calling for a no confidence motion in the coalition government. And petitioning is what we must all now do. Because this ramshackle coalition that May has cobbled together can be toppled. Especially as Tory MPs are already calling for May to go. And if we can turn the polls around that much in a matter of weeks, imagine what we could do with another election.