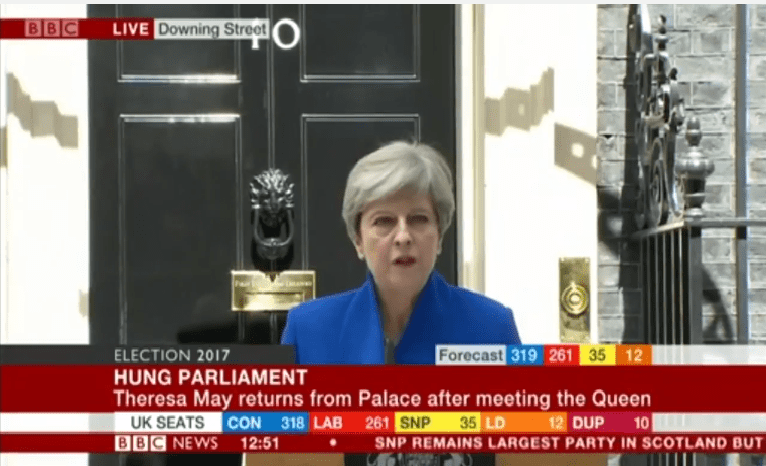 Theresa May is under near-universal pressure to resign as senior Conservatives say it’s all over. Top Conservatives have joined widespread calls for May to go. Leaders of Labour, the SNP, the Lib Dems, and the Greens – representing over 50% of the UK vote share – have all demanded May steps down.

The calls come after Labour leader Jeremy Corbyn defied the expectations of the entire media and political class by a country mile. Corbyn has achieved the greatest vote share increase for Labour since 1945, on the back of a progressive social democratic platform.

By contrast, May’s campaign has been derided as a humiliating disaster worldwide. Former Education Secretary Nicky Morgan said she must “eventually” resign:

She’s made an absolute catastrophic mistake – two mistakes. One, she calls an election – a snap election – for which she’s unprepared. Two, she runs it in a poor way and what is looking like an easy win, she turns into a minor defeat.

Asked whether she should step down, Turnball replied:

Parties representing majority of UK voters call on May to resign

Stepping back from May’s own party, every opposition party leader that has MPs in England and Scotland has called on May to resign. Jeremy Corbyn, Caroline Lucas and Jonathan Bartley, Tim Farron and Nicola Sturgeon – representing over 50% of the UK voteshare – have demanded her resignation. Scottish Labour leader Kezia Dugdale also called on May to go, saying she lost her gamble.

May called the election because delivering Brexit was apparently “unworkable” on a working majority of 17. Now, she is eight short of a majority, facing a deal with the extremist Northern Irish party the DUP. Such a deal would only represent around 44% of the overall vote, with representation in areas like Scotland running very thin. But the Tories and the DUP combined have more seats in parliament.

On 8 June, May’s top team faced a monumental battering. Home Secretary Amber Rudd managed to hang on by a handful of votes. But many other ministers weren’t so lucky. Nine of May’s government ministers lost their seats to a resurgent Labour.

The number of Tory heavyweights calling for May to go keeps piling up. Anna Soubry was the first. The MP for Broxtowe in Nottinghamshire told BBC News that May should “consider her position” after a “dreadful” performance. In a similar vein, former Chancellor George Osborne told ITV that he was unsure if May could “survive in the long term as Conservative Party leader”. Another senior Tory MP told the BBC: “I don’t see how she can stay”. South Cambridgeshire MP Heidi Allen, meanwhile, said:

Frankly, if the leader picks people who advise her so badly and cannot see that they’re being advised badly then that tells me, I’m afraid, that that’s not the leader we need.

Former Tory MP Paul Goodman, editor of the influential ConservativeHome website, agreed. He said there was a “consensus” among Tory backbenchers that May was “unlikely to recover” from the losses.

The Conservative leader is facing almost universal pressure to resign. Every prominent opposition party in the UK, along with many of her own senior Conservatives, have demanded she steps down. The opposition parties make up over 50% of the vote share, higher and more widely representative of the UK than the Tories and the DUP.

May U-turned to call an election, promising  a “strong and stable” majority government. Yet again, she has brought Britain the opposite of what she promised. No wonder everyone thinks she should go.

– Join the emergency London protest on Friday 9 June calling for May to go.