After weeks smearing Corbyn, May hopes for a parliamentary deal with a party backed by terrorists [VIDEO] - Canary 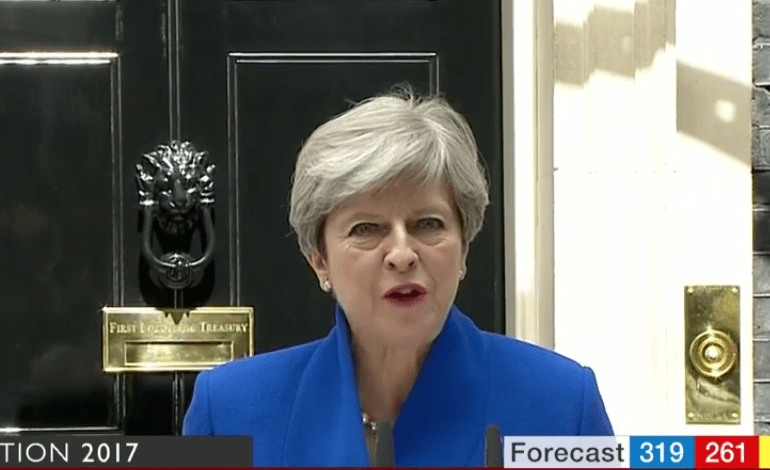 Theresa May has spent weeks smearing Jeremy Corbyn for baseless ‘links’ to republican terrorism in Northern Ireland. But now, May herself is actually trying to enter a parliamentary deal with a party backed by terrorists. As LBC presenter James O’Brien points out, the extremist Northern Irish DUP has been:

That’s not all. Founders of the loyalist terror group Ulster Resistance went on to be prominent DUP politicians. For instance, Peter Robinson, who was DUP leader until last year, was an active member of the group. Ulster Resistance’s activities included smuggling arms to the UK, such as RPG rocket launchers.

In 2017, Northern Ireland has moved towards peace. But just last week, present DUP leader Arlene Foster was forced to defend meeting a UDA chief just 48 hours after the murder of Colin Horner in a loyalist feud.

Given the Conservative Party’s smears about Corbyn, many are pointing out the naked hypocrisy:

On LBC, O’Brien rightly called out the right-wing press on this issue. The host points out that, if the media moguls are apparently so concerned with Northern Irish terrorism, surely they will go after the DUP?

If Jeremy Corbyn is a 'terrorist sympathiser', then what will Theresa May be called when she joins with the DUP? #dupcoalition pic.twitter.com/wc1qtqagjn

Imagine not voting Corbyn 'because he's a terrorist sympathiser' and ending up with Tories getting into bed with the DUP.

The DUP’s links to terrorism are not the only aspect astonishing people. The party is anti-gay marriage, preaches creationism, and denies climate change. It is also unequivocally anti-abortion. So the party supports forced pregnancies, even after rape, incest or both.

A Conservative government propped up by the DUP is nothing short of a dangerous shambles for May. Especially given significant fears that a Tory deal with the DUP could jeopardise the Northern Ireland peace process by undermining the UK government’s neutral position. The Conservative leader is now facing near-universal calls to resign from almost all parliamentary opposition parties, along with many senior Conservatives.

But May is hoping to cling to power via a party backed by terrorist groups. After the desperate, unfounded smear campaign May ran against Corbyn, it’s terribly ironic.

– Join the emergency London protest on Friday 9 June calling for May to go.