Theresa May has found the perfect way to hide the truth from Grenfell residents, says lawyer [VIDEO] - Canary 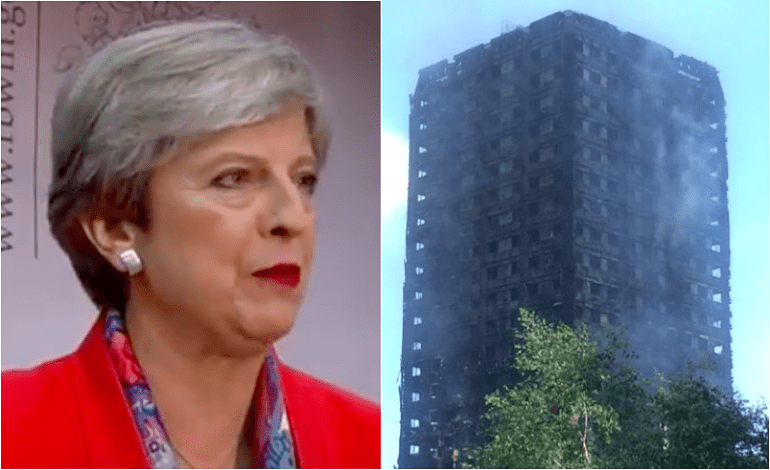 A lawyer has pointed out that Theresa May’s demand for a public inquiry into the Grenfell Tower fire is suspicious. She’s also claiming that residents should be demanding an inquest, not a public inquiry, if they truly want justice.

May visited the Grenfell Tower site in West London on Thursday 15 June to meet with firefighters. While not meeting with residents themselves, she made the following statement:

Right now people want answers, and it’s absolutely right, and that’s why I am today ordering a full public inquiry into this disaster. We need to know what happened; we need to have an explanation of this, we owe that to the families. To the people who have lost loved ones, friends, and the homes in which they lived.

These demands for a public inquiry have been iterated by activists and also Jeremy Corbyn, who said: “The truth has got to come out, and it will.”

But a lawyer has said that a public inquiry is not the right way to go:

The lawyer, Sophie Khan, was speaking on Newsnight of her experience representing the residents group of Lakanal House. In 2009, a fire in the Camberwell Tower block killed six people and injured 20 as a fire tore through the 12-storey building. The inquest found that the fire was caused by unsafe renovation work and council failings. The council was fined over half a million pounds as a result. The inquest lasted 11 weeks.

Public inquiries, in contrast, can last decades, involve excessive costs, and have not been void of scandal. Khan also says it is very much a government-led process, taking the control away from residents:

Give control to the residents

Khan also said that, in her experience, residents in housing associations are not listened to. She alluded to the fact that fire assessments may not have been adequate when testing the building. Another question that needed to be asked then was why the fire brigade was not able to test the building? But these are questions residents would actually not be able to ask in a public inquiry. This prompted presenter Kirsty Wark to ask:

Is this a kind of unintended consequence of the public inquiry, or do you think it’s an absolutely worked out position that, if the government goes for a public inquiry and not an inquest, they will be not subject to the same scrutiny?

Yes… that is correct. Because in an inquest, they lose control of what a jury verdict will do. And the… juries will come out with narrative verdicts which may be very difficult for governments to hear.

In Khan’s opinion, residents should be demanding an inquest over a public inquiry. She added:

I am very concerned as to why Mrs May came out so quickly to say public inquiry. What is there that she knows that needs to be hidden?

Solicitor @khan_sophie warns @BBCNewsnight that everyone should be demanding inquests, not a public enquiry, into Grenfell fire. pic.twitter.com/yfsTtKhvnD

However, advisory charity INQUEST has issued a statement listing a number of reasons that it thinks there should be a public inquiry rather than an inquest, saying:

We are in no doubt that the interests of the bereaved families, survivors and the public at large are likely to be better served by a wide ranging judicial public inquiry rather than an inquest in a large scale disaster such as Grenfell House.

The Grenfell tragedy is still unfolding. There are many still missing, and the final death toll has not been confirmed. Some estimate that it may be around 100.

While the country is mourning, anger is mounting. Particularly among the affected community. But the risk is that committing to a public inquiry will kick the issue into the long grass. And the momentum we are seeing now for culpability and accountability could dissipate.

That cannot be allowed to happen. We need the right approach and a quick and effective path to the truth.

This article was updated at 20:30 on 16 June to include a quote from INQUEST, and to remove the suggestion in the copy that there can only be either an inquiry or an inquest. See INQUEST’S statement for more.

Featured image via Youtube/author’s own