The Finsbury Park vigil showed Britain at its best [VIDEO] 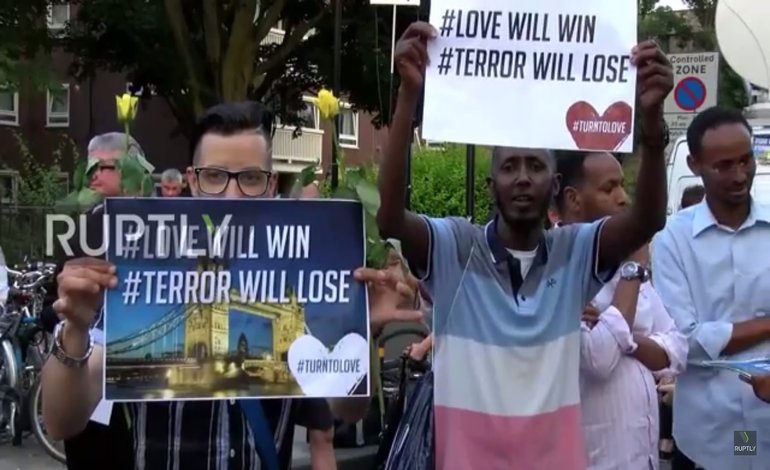 Hundreds of people attended a vigil at Finsbury Park in the wake of another terrorist attack in Britain. Among those in attendance were London Mayor Sadiq Khan and Brendan Cox. Well-wishers laid flowers and candles at the memorial, and a minute’s silence was held. The vigil saw people from all faiths and communities joining to unite against terror.

One person died and 11 more were injured after an apparently unprovoked attack. A man named as Darren Osborne allegedly drove a van into pedestrians on Seven Sisters Road on Monday 19 June. He was apprehended and arrested at the scene.

During the vigil, chairman of the mosque Mohammed Kozbar addressed the large crowd. He summed up the mood of the occasion:

We all have harmony in this area, and these people try to divide us, but we tell them that we will not let you do that.

Jeremy Corbyn also visited the mosque to deliver a speech after he attended afternoon prayers at the Muslim Welfare House close to the scene.

Following the Grenfell fire and Finsbury Park incident, scores of people across the UK have done what they can to help those affected by these tragedies.

Nearly £3m had been raised for the victims of Grenfell within 48 hours. Muslim aid volunteers have been praised for their help providing meals, medication, hygiene kits, and blankets. This was on top of a coordinated effort with local churches, mosques and charities in the area.

A local synagogue offered to help those affected and various entertainers have been seen giving a helping hand and speaking up for locals. A six-year-old donated all of his pocket money to aid efforts after visiting Grenfell with his father.

Footage across social media displayed the huge effort made by everyday people with mountains of food and clothing donated in order to help those affected. From day one, locals raced to the scene to provide for those in need, and their efforts have been ongoing. Such is the effort, there are now reports that donations have been turned away.

But where is the government?

People have criticised the government for a lacklustre response to the Grenfell Tower fire. Theresa May has also admitted that the government response has not been good enough. Local residents have continually voiced their dismay at this. One local even accused May of being ‘cold like a fish’. The country has been rocked by several tragedies over the last few weeks. However, many are waiting to see if the people of Britain are the only ones who are able to provide truly strong and stable leadership.

– You can also donate to the Grenfell Tower Appeal.