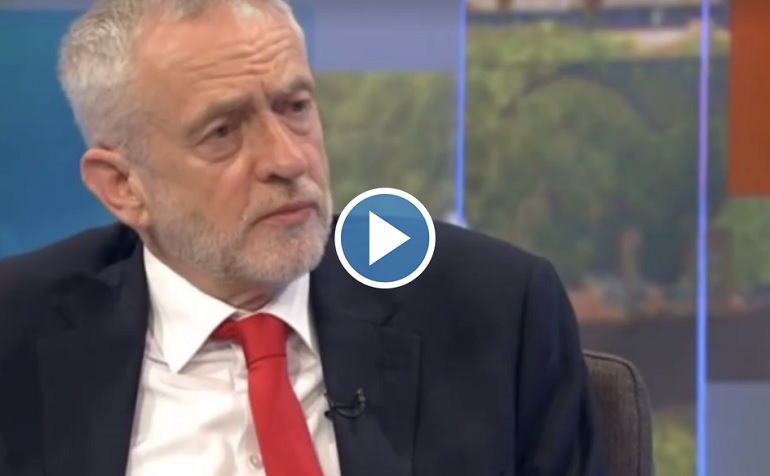 Properties must be found – requisitioned if necessary – to make sure those residents do get re-housed locally.

Some commentators were quick to criticise this idea. But speaking on ITV‘s Peston on Sunday programme on 18 June, Corbyn had the perfect response for such critics. He said:

Every day at Heathrow, planes get delayed, hundreds of people get stranded… Hotels are found for them immediately… [But] 400 or so people [from Grenfell Tower] still – most of them – have not got somewhere decent or safe or secure to stay…

The point being that, if travellers get hotel rooms when airlines delay flights, people who suffer in disasters like the Grenfell Tower fire deserve similar support.

“Bring all assets to the table”

But Corbyn didn’t stop there. When questioned about his suggestion of using vacant properties in the local area to house the Grenfell victims, the Labour leader said:

Occupy. Compulsory purchase it… Requisition it. There’s a lot of things you can do.

And he explained the context which makes such an idea acceptable:

There are a large number of deliberately-kept-vacant flats and properties all over London. It’s called land banking. People with a lot of money buy a house, buy a flat, keep it empty…

Homelessness is rising. The housing crisis is getting worse. And my point was quite a simple one – in an emergency, you have to bring all assets to the table in order to deal with that crisis.

Dealing with disaster in the short term and the long term

There are currently 1,399 empty houses in Kensington and Chelsea (the borough where Grenfell Tower is). And across London, there were 19,845 homes sitting idle for over six months in 2016. In fact, offshore companies own a big chunk of London’s houses, with 2016 having seen a 9% rise in the number of properties owned by offshore companies. In Kensington and Chelsea, meanwhile, 7% of all properties are owned in offshore tax havens.

Requisitioning empty houses is the right short-term solution for the Grenfell Tower victims. But in the long term, the government needs to deal with Britain’s chronic housing crisis – a problem that the Grenfell Tower disaster has acted to highlight.

Britain desperately needs and deserves a long-term solution to the housing crisis. But in the meantime, Jeremy Corbyn is right. The aftermath of the Grenfell Tower disaster is an emergency situation. And in such a situation, authorities should bring all available assets to the table.