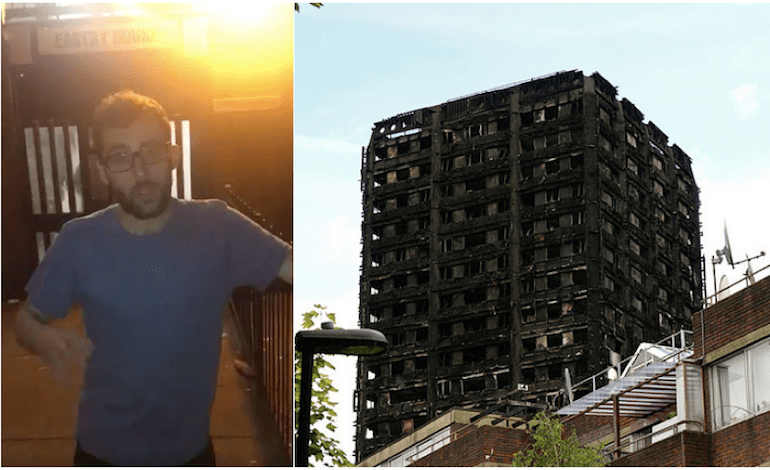 After escaping Grenfell Tower from the 17th floor, a survivor explained how his support from the council has left him fearing the worst and believes it may be trying to class him as intentionally homeless.

28-year-old Mesrob Kassemdjian spoke to The Canary at the Westway Sport and Leisure Centre by Latimer Road, a stone’s throw from the harrowing scenes seen only days before. The Westway is the official assistance centre for friends and family, but it’s one of numerous efforts set up around the community, offering accommodation, food, drink, clothes and toiletries. In the absence of sufficient state support, the citizen-led response has been immense, with arguably too many physical donations.

But Kassemdjian, a Grenfell resident who survived the unprecedented blaze, is only hearing about these efforts piecemeal; relying on rumours and secondhand information to find assistance while the council’s response has been frosty.

After escaping and helplessly watching Grenfell Tower burn, Kassemdjian and his family gave their flat number and name to the police. He was with his girlfriend and his aunt, 67, at the time they were taken to a nearby community centre and eventually placed in a hotel in the borough. And Kassemdjian admits it’s comfortable. But several days following the fire, on Saturday 17 June, a member of staff from the council came to see them. Kassemdjian explained:

I met some guy from the council… some housing guy. He’s just a guy who fills in the forms but he was really ice cold, not compassionate.

It’s been no secret that Kassemdjian has been living there. All of his proofs of address place him at Grenfell Tower, including his passport. And he’s also registered to vote there.

But it’s not the council that gave me the house, it’s my Aunty’s house, so they don’t want to house me. They’re gonna make it like I’m homeless and then my Aunty will be put in an old people’s home. That’s what I’m scared of. The guy was super cold and the questions he was asking to my Aunty were ‘Do you have any medical requirements that can only be done here?’ Or ‘Do you have friends or a network in the area that you need?’ I feel like if you answer one of these questions wrong, they’re going to kick you out. It’s an examination, it’s really scary actually. There are no questions about how you are doing after the trauma, or hearing your neighbours screaming for help.

On the night in question, it was around 1.15am when Kassemdjian realised something was wrong:

We saw the fire from my window. I decided we had to leave right now… I knocked on one of my neighbour’s doors. And because I told my Aunty and my girlfriend to go down the stairs, after knocking on one I had to follow them. I didn’t know if I was doing the right thing because you know they told us to stay inside – that’s the protocol. But I didn’t listen, I made my choice, and it was a gamble.

He explains that the smoke was getting thicker, the further down the stairs they went:

I didn’t know if we were going to make it and you know we were breathing in smoke. I was supporting [my Aunty] to go down the stairs.

Kassemdjian and his family were unable to respond to people’s calls for help and he says this hasn’t come without lingering memories:

My neighbour, the door I knocked on… I told her to run… really loudly so everyone would hear. She went to get her husband. They were a moment or two behind us. They got separated between the 14th and 15th floor, because the smoke had become so strong, and there was pandemonium, people pushing and shoving. She got lost and we found out yesterday that she died. I feel kind of survivor’s guilt.

And if they hadn’t left when they had, he also fears they would have not made it.

Radio silence and the rumour mill

Kassemdjian has also heard that fellow residents have been rehoused not only out of the borough, but out of the city:

The £5million isn't being used to rehouse, victims are being put in old people's homes and outside of London! Listen to this resident! pic.twitter.com/EoTib0ogBF

He realises that he has heard these things secondhand, but they worry him and other residents. But his fears are not completely unfounded. His neighbour’s husband, Sabah, apparently distraught after his wife passed away in the fire, was taken to a retirement home.

But it’s the lack of answers that are “freaking” the residents out. And instead of just rehousing them, authorities have been asking “stupid questions”.

The Canary contacted the Royal Borough of Kensington and Chelsea Council to ask whether people have been housed outside the city and how many evacuees had been given temporary accommodation and within which areas. The council has not responded.

And it’s this radio silence and these unanswered questions that are continuing to make life chaotic for residents like Kassemdjian and his Aunt.

What system is this?

So far, the council and charities have given them small amounts of money at a time. Up to £500. And advising them to come back when it runs out. But as Kassemdjian explains, this is no system. There’s nothing he can buy right now because he doesn’t have a house. And he is suspicious of exactly why they are choosing to do it this way rather than disseminate the funds made available to the victims in a fair way:

I fear they are doing this to keep us quiet while the media is very interested. When the media loses interest, the money will stop and they will house us somewhere else.

Kassemdjian is not alone in his lament over the council and government’s response. Lack of co-ordination to get abundant donations to victims has made the community angry. In addition, there is no trust over official figures of the death toll from the tower blaze. As Kassemdjian says, he is hearing rumours and he does not know the facts. He doesn’t know what the council has done or what it will do. But it has done nothing to qualm the clear fears that he and other residents have. Neither confirming nor denying is a damning indictment on the borough.