The Spectator clocks the mounting Labour surge and goes beyond panic, into full meltdown [IMAGE] - Canary 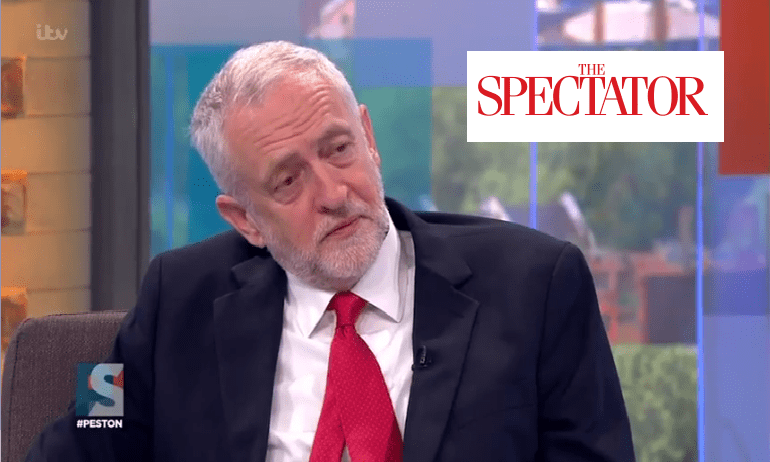 Leading conservative outlet The Spectator has clocked the mounting Labour surge and gone beyond panic, into full meltdown. Yet another post-election poll has placed Labour ahead of the Tories. Survation, one of the few polling companies that almost predicted the election result, has Labour on 44% and the Conservatives on 41%.

As Labour’s surge in popularity isn’t letting up, The Spectator appears to have lost the plot: 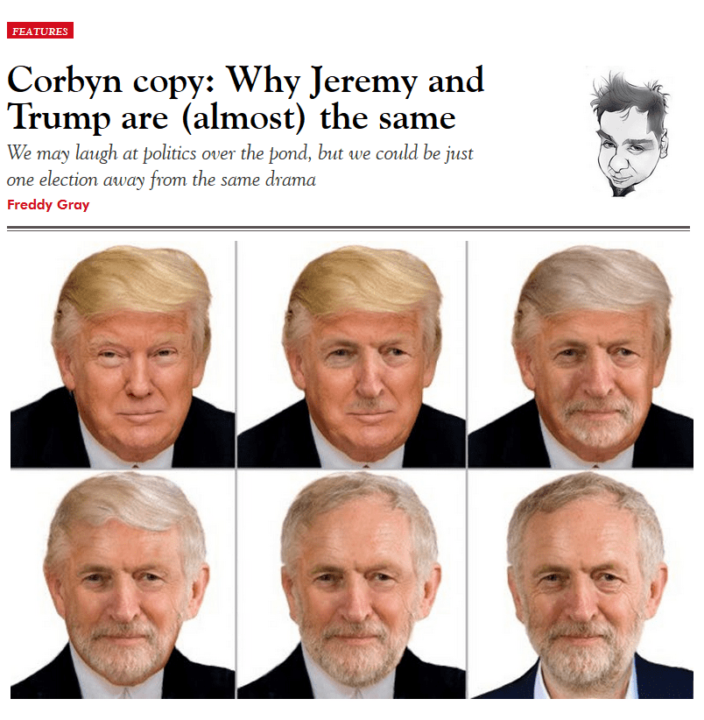 The rest of the article may be even more botched than the featured image. Author Freddie Gray begins:

Corbyn, 68, and Trump, 70, are both anti-establishment insurgents who have been married three times.

Aside from superficialities like age and marriage, the only way Jeremy Corbyn and Donald Trump are similar is they are both partly a product of a collapsing ideology – neoliberalism. But they are polar opposites in both personality and policy.

Trump ‘cuts out the middleman’

Trump only positioned himself as an anti-establishment candidate to win votes. This is all too clear. Since his election, Trump has only increased the power of the multinational corporations. Naomi Klein, author of This Changes Everything: Capitalism vs. the Climate, branded Trump’s administration a “corporate coup d’état”. She elaborated:

Well, I think one of the things that’s remarkable about his appointees is just how many… CEOs are going into these positions, and just this process of kind of cutting out the middleman, right? Exxon running the State Department.

Trump appointed Rex Tillerson as his Secretary of State. Tillerson was literally CEO of oil giant ExxonMobil up until he took over one of the highest public offices in the US. But it doesn’t stop there. For example, Trump’s Secretary of the Treasury Steven Mnuchin was a hedge fund manager. Former investment banker Wilbur Ross, meanwhile, is Trump’s Secretary for Commerce.

The US President challenged corporate hegemony in rhetoric, then only dramatically increased its power.

By contrast, Corbyn offers a real alternative to a political system dominated by big business. A Scandinavian social democracy where public services aren’t subordinated to profit. This is a concrete economic plan. Progressive Scandinavian governments – Sweden, Denmark and Norway – were running budget surpluses before the 2008 crash. Not after reckless cuts, but on the back of a robust public sector and welfare system. Services such as education, energy, transport and housing are the backbone of society – they facilitate economic growth. So they need our full attention. Rather than private companies like ExxonMobil making a killing off our need for energy, then, Corbyn pledges to roll out local, publicly run, renewable energy firms.

Despite the overwhelming contrast between the two candidates, The Spectator still sought to smear Corbyn with a far fetched association with Trump. As Labour surges in popularity, the desperation is almost palpable. As well as poll leads, membership reportedly surged by thousands after the election result. Although Labour does not provide a running commentary on its membership figures, the party is already the second largest in Europe thanks to Corbyn’s platform.

Since the election, Corbyn has polled neck and neck with Theresa May on ‘who would make the best Prime Minister’. Both are on 39%. No Labour leader has polled level or ahead of their Conservative counterpart since 2008.

So no wonder The Spectator is panicking and washing its credibility down the drain with baseless comparisons between Corbyn and Trump. The idea you can equate anti-racism with racism, or social democracy with turbo-charged crony capitalism, is insulting. The smear-by-association between Trump and Corbyn from the Labour leader’s opponents only shows they have nothing left to say.