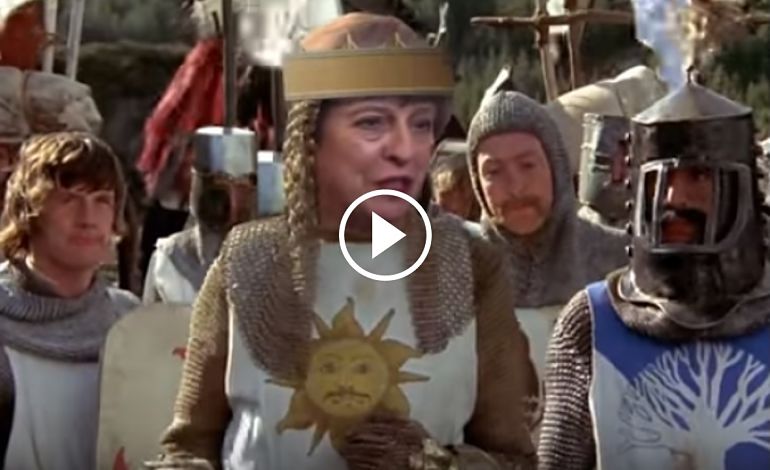 An Australian TV news show has produced the cut-up video to end them all. It stitches UK Prime Minister Theresa May into the classic Monty Python role of King Arthur. Using clips of May’s post-electoral ditherings, it lampoons her current state of inertia.

Monty Python and the Holy Grail is the tale of a weak and wobbly ruler with a doubtful mandate and a questionable sense of direction. Surrounded by a cack-handed cohort of chaotic cronies, the ruler sets off on a fatuous mission. This leads to failed international diplomacy, dubious alliances, battles against bucket-headed foes, and a massively unsatisfying conclusion.

Video editor Huw Parkinson, from the ABC show Insiders, clearly saw the parallels between May and Graham Chapman’s imperious but irritable King Arthur. May is currently struggling to assert her authority and seems unable or unwilling to articulate her plans. It’s unclear whether all her colleagues are actually on her side. And it seems certain that she can expect a colourful range of insults from across the Channel.

May in a nutshell

It’s all here: Lord Buckethead, the curious demands of the Democratic Unionist Party (DUP), and the relentless pressure to explain herself. And of course, the ever-present desire to run through fields of wheat (even though it’s naughty).

Sometimes, it takes a long view to see clearly. And sometimes, it takes humour to make a serious point. Huw Parkinson has produced a really rather sharp observation of current UK politics; and given us all a thoroughly good laugh in the process.

Watch it and smile: