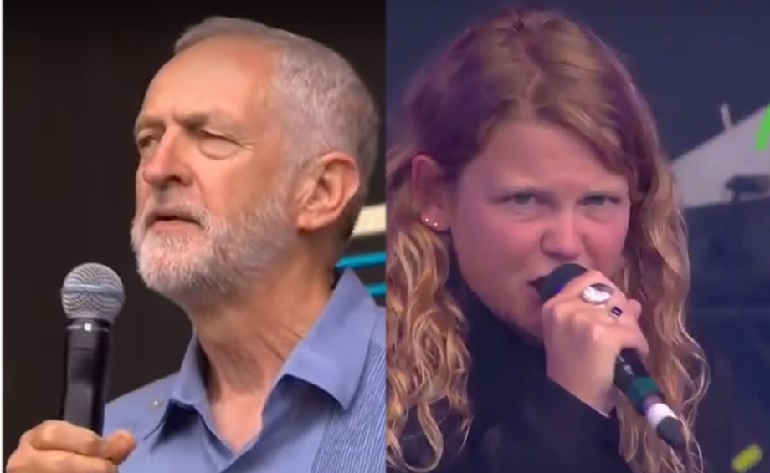 Addressing a large crowd at the festival, Corbyn said:

And he insisted that we can all:

learn from those that have written music or written poetry for us.

Kate Tempest is no stranger to exposing the “diabolical regime” of neoliberalism with style. But at Glastonbury 2017, she opened her set with a powerful message about Theresa May’s government and its cheerleaders in the corporate media. And it was just the kind of inspirational poetry that Corbyn was probably referring to in his own speech.

Strong and stable into ruin…

Murdoch headlines – leeches for the letting of our blood lust,

Blame it on the migrants, suffocating in containers…

Privatise and privatise in private – let the nurses burn,

Along with every other resident who voices their concern…

Under May, there is a gulf that separates us,

And it seems to gape a little wider every day…

‘I want to create a truly “hostile environment“‘ –

Her words, not mine.

Corbyn’s speech, meanwhile, echoed a number of the sentiments in Tempest’s monologue. He said:

creativity… can be a tool for getting a message across: a message that racism is wrong, divisive, and evil in our society…

Surely, we can – as intelligent human beings – do things differently and do things better.

He then quoted from a poem by Percy Bysshe Shelley, saying:

Which in sleep had fallen on you.

Ye are many. They are few.

After his speech, one NME interviewer said to Corbyn:

While the Labour leader denied that, the fact is that he was indeed treated as such. At a time when more people would apparently prefer Corbyn to be prime minister than Theresa May, the festival was full of “Oh Jeremy Corbyn” chants. And comedian Mark Steel is just one of the people who clearly think that Corbyn deserves such “rock star” treatment.

Hee hee, I just have to wish for something and 2 years later it comes true https://t.co/RZZMggIB4s

The tide of public opinion in Britain is clearly changing. The ideas put forward by Corbyn’s Labour Party in the recent general election were evidently inspiring enough to break through the smears of the right-wing press. And with influential figures like Kate Tempest joining in with powerful critiques of Tory rule, the momentum in favour of change seems likely to continue.

– See more of The Canary‘s coverage of the 2017 general election. Also watch Corbyn’s speech at Glastonbury’s Left Field stage here, and see his 26 June response to the Tory/DUP deal here.