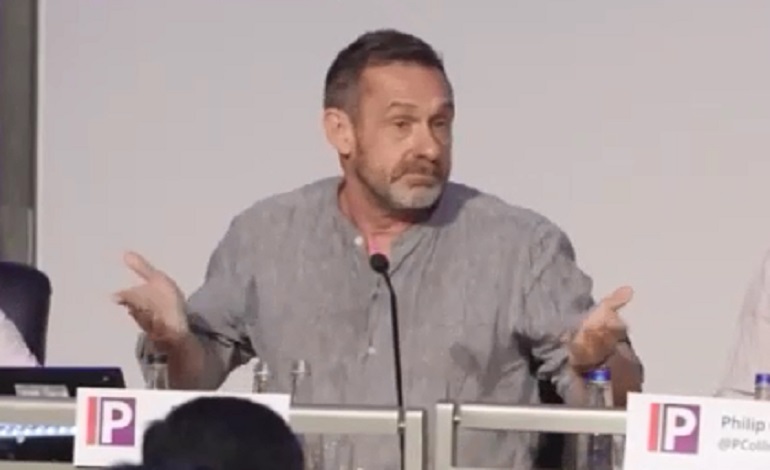 Journalist Paul Mason caused a storm when he spoke at the Progress annual conference on Saturday 24 June. Because he told the Labour-leaning organisation that if the delegates weren’t happy, they should “form their own party and get on with it”.

Calling out the “bullshit”

Mason was responding to a direct question from a Progress delegate. Angie from Enfield said [from 2:32.50] she felt “scared” to speak at her Constituency Labour Party (CLP) meetings. She quoted a tweet from Mason, in which he said that:

Good morning. It's time to call out the bullshit of the Labour "moderates" – it cost Labour victory. 1/~ They fought a *defensive* campaign

Angie said “I spent the past six weeks [campaigning]…”, to which the room applauded. And then, she didn’t “know what else to say”. But in response to Angie, Mason stunned the room by saying:

If you want a centrist party… a pro-Remain party that is in favour of illegal war, in favour of privatisation – form your own party and get on with it.

Mason explained his tweet in detail, saying [from 2:53.30] that “we’re all part of the Labour Party” and that he had “come here to try and have a debate with you about what we can agree on”. But he also cited the fact that people were undermining Corbyn while out campaigning during the election. He said [from 2:55.40] that:

those candidates that fought the election specifically saying [on the doorstep]… ‘Jeremy can’t win; I’m a good local MP’… If you did that… it then disorientated you about electoral strategy.

An example of Mason’s claim was MP for Enfield North Joan Ryan. During her campaign, she wrote to voters saying that “whatever your misgivings about the Labour leadership, I hope that you will consider voting for me as your local MP”:

Wow, what an endorsement of @jeremycorbyn by his candidate in Enfield North @joanryanEnfield #LabourShambles. Vote @nickdebois on June 8th. pic.twitter.com/S855eONFwg

And Mason used the internal undermining of Corbyn to issue the Progress delegates with a stark ultimatum [2:57.30]:

The question for people in this room is: it is now a left-wing Labour Party… It is a Labour Party led by a man… vilified… as a terrorist sympathiser. And we got 13 million votes. Do you want to be part of it or not? There could be a British Macron… You could have a British… ‘totally sabotage Brexit’, ‘end Brexit’, ‘reverse Brexit’, ‘second referendum’ party… Now is the time.

But does he have a point?

Mason is known for his forthright manner and no-nonsense debating. But his speech at the Progress conference points to a deeper problem within the Labour Party. Because while many MPs who were once opposed to Corbyn have, after his election success, backtracked and said they now support him, there are others who fundamentally do not, and never will, agree with him or his policies. The question for Corbyn and the party is how long will these people stay quiet? And can Labour ever be truly united while many are still poles apart from its leader?

It goes back to the issue which has often dominated the debate since Corbyn took power in 2015. That is, should the Labour Party listen to its membership who support Corbyn, or to the electorate? But that choice would seem clearer after the election; it should, and now can, listen to both. Because the voting public has obviously warmed to Corbyn and his policies. And as Mason said, if people in Labour don’t like it, maybe they should indeed “form their own party”.