The Daily Mail just smeared every Corbyn supporter. So Labour has done something extraordinary [IMAGES] - Canary

On Wednesday 12 July, The Daily Mail ran a front page dedicated to highlighting the “abuse” of Conservative MPs by a “left-wing hate mob”: 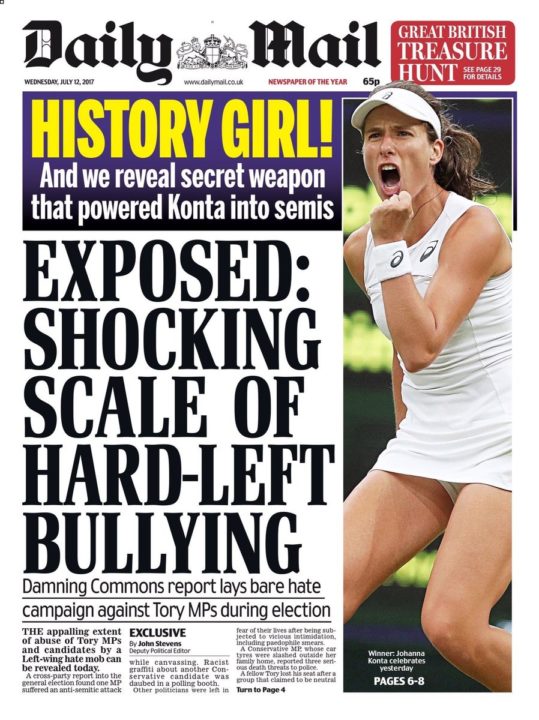 The tabloid’s story came ahead of a parliamentary debate on abuse of MPs during the general election campaign.

But in an extraordinary letter, Labour has hit back at the Tories. And in doing so, it has probably put to bed Theresa May’s hopes of the party helping her to develop policy.

The Daily Mail reported that some Conservative MPs and candidates had apparently:

But Labour Chair Ian Lavery and Shadow Minister for Voter Engagement Cat Smith have responded to accusations of abuse by Labour supporters with a letter to Conservative Party Chairman Patrick McLoughlin.

A war of words

We are writing to express our dismay and deep concern at the vitriolic personal attacks that defined the Conservative Party’s election campaign.

Parties and politicians have a responsibility to set an example, by treating others with dignity and respect, including those with whom we strongly disagree. The Conservative Party has instead promoted personal attacks as a core component of its national campaign.

Abuse against candidates on social media is completely unacceptable. The Conservative Party perpetrated this on an industrial scale by spending millions of pounds to post highly personalised and nasty attack adverts on voters’ Facebook timelines without their permission.

This is not an isolated incident. Last year Zac Goldsmith MP ran an extremely negative, divisive and racially discriminatory campaign against Sadiq Khan. It was described by Sayeeda Warsi, the former Conservative Party Co-Chairperson, as “appalling”.

Only yesterday it was revealed that Conservative MP Anne Marie Morris used a racist slur while speaking on a panel at the East India Club last week, evidence of the level to which abusive and discriminatory language has been tolerated by the Conservative Party…

…the Conservative Party must also take responsibility for the attacks financed and conducted as part of their national campaign.

Labour, in contrast, fought a positive, hopeful campaign based on policies to transform Britain for the many not the few. Jeremy Corbyn has always said “he doesn’t do personal” and insisted that all Labour MPs run positive campaigns based on our policies and the Conservative Party’s record, rather than peddling attacks on individuals.

You can read Lavery and Smith’s full letter here.

Corbyn’s critics have repeatedly accused him of not doing enough to tackle alleged abuse by Labour members and supporters. Even though he has repeatedly condemned such attacks. But the report by The Daily Mail, Labour’s letter, and the parliamentary debate all raise bigger questions about MPs and democracy in general.

When is genuine criticism abuse?

There should be no place for abuse of any kind in UK politics. Its impacts can be devastating. But there must also be a clear distinction between genuine abuse and genuine criticism. Because it’s easy to forget that MPs ultimately work for, and are accountable to, us. And the danger with them debating their own abuse and passing any legislation in relation to it is that it may be used as a blunt instrument to restrict democratic debate.

Conservative MP Sheryll Murray is a case in point. She claimed she was abused during the general election campaign:

Over the past months, I’ve had swastikas carved into posters, social media posts like burn the witch… People putting Labour Party leaflets on my home, photographed them and pushed them through my letterbox. And someone even urinated on my office door. Hardly kinder, gentler politics.

But constituents said Murray repeatedly ignored them. They pointed out that her office is next door to a bar/club, which may account for the urinating. She made headline news after she claimed she was “pleased” there were food banks in her constituency. At the same hustings, she said to the audience “don’t be so rude” after they applauded a teacher. She told another person to “sit down” when they asked a question she didn’t like about Saudi Arabia. Meanwhile, she threatened to call the police on a disabled woman who was questioning her. And if that wasn’t enough, her team was also investigated for an alleged assault over an incident at the hustings.

When politicians stand accused by the UN of committing “grave” and “systematic” violations of disabled people’s human rights, the public are bound to be incensed. Or when politicians refuse to lift the poverty-creating 1% public sector pay cap, they should expect millions of people to speak out. And when they introduce reforms which see nearly 90 people a month dying after having their benefits stopped, it is unsurprising that many people feel disgusted.

All abuse absolutely needs to be condemned. But not all criticism is abuse, and the public has a right to question politicians at every opportunity. MPs also need to be fully accountable for the decisions they take. Because, to many of us, those decisions are a matter of life and death.