Jeremy Corbyn has used his Facebook account to troll the Prime Minister in the best possible way. In response to Theresa May’s request for help from Labour, Corbyn sent her a copy of the Labour manifesto with a personal message: 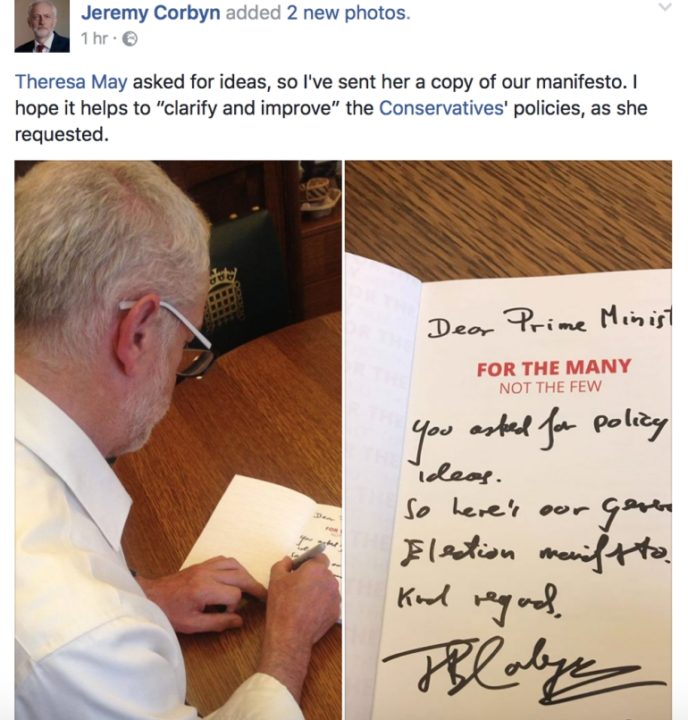 You asked for policy ideas. So here’s our General Election manifesto.

In a desperate bid to try and save some semblance of government, May asked Labour if it would help form government policy. A source from Corbyn’s office said they would be happy to send her a copy of their manifesto. And it seems Corbyn acted on the suggestion.

But May’s plea to Labour shows just how weak and wobbly her government is. It even led to The Telegraph calling her plea “extraordinary”. And there is almost daily speculation over the tenure of her leadership.

Corbyn on the war path

Meanwhile, Corbyn is on the election war path. Instead of taking the customary parliamentary summer holiday, he is planning to spend the time visiting and campaigning in marginal seats. And not only will Corbyn be out and about during parliament’s summer recess, but so will his shadow cabinet. In total, they will visit around 70 marginals. All this will be accompanied by campaigns and internal election preparations – like making sure marginal seats have candidates in place.

This proactive campaign may come as a bit of a shock for Conservative MPs planning to jet off for their summer holidays. And with Corbyn surging ahead in the polls, this combination of drive and dedication from MPs over a holiday period seems unprecedented.

Corbyn’s humour also has a way of shining through in his campaigning. But the Facebook post above has a serious point. If May truly wants Labour’s input into policies, she need look no further than its manifesto, which almost 13 million people voted for on 8 June.

– Consider becoming a member to support The Canary and the work we do.