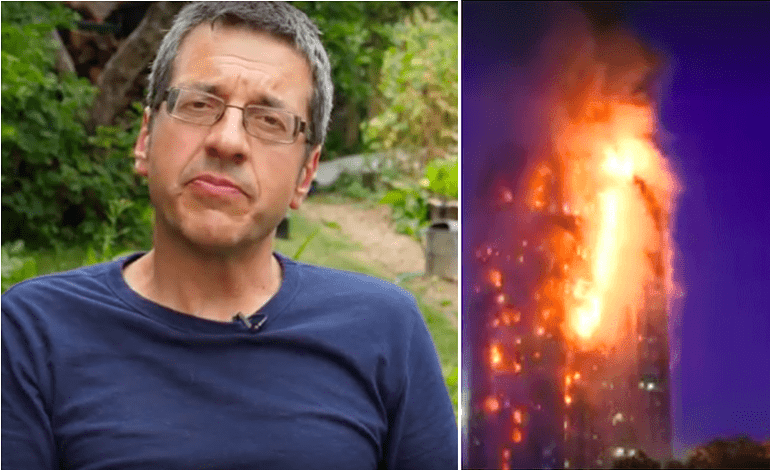 Guardian columnist George Monbiot has pulled apart the entire Tory culture that he says led to the Grenfell Tower fire in a new video by Double Down News.

In it, he says the causes of the devastating fire that occurred on 14 June revolve around the removal of public protections, often referred to as ‘red tape’. And he argues that this factor should be considered by the inquiry into the fire. But as he insists, we’ll have to keep the pressure up if we want to see any justice.

A defendant doesn’t choose his judge

Monbiot believes there is a problem if the terms of reference of the public inquiry into the Grenfell Tower fire are too narrow. And he’s worried they won’t compel the judge to look at government action or inaction that may have led to the fire.

This is about something much, much bigger… And the reason for this is that it’s the government which is allowed to set the terms of the inquiry.

It is the government which is allowed to vet the chair of the inquiry.

We don’t allow defendants in a criminal trial to determine which charges they’re going to be tried on. We don’t allow them to vet the judge.

The government should have no role whatsoever in these decisions, because basically it is then being asked to judge its own failures. And that, it will never do.

The crack team tasked with ripping up public protections

Monbiot describes what happened at Grenfell Tower as “mass murder”, caused by stripping away “public protections, which prevent lots of people from being incinerated”.

And he says there are journalists, organisations, and government officials whose job it is to strip them away. Monbiot points to those sitting on the Red Tape Initiative (RTI) project as an example. This is a cross-party group with considerable Tory influence and dubious conflicts of interest:

Monbiot believes that the RTI is using Brexit to create a “bonfire of regulation”. And he says one such consequence of doing so in the past was the repeal of fire prevention measures in the London Building Act in 2012. He states that, if they had remained in place, the fire in Grenfell Tower would probably not have spread like it did.

Some don’t agree with Monbiot’s view. A blog in The Spectator, for instance, argued that it was red tape itself that led to the Grenfell Tower fire. It claimed that “many buildings were renovated in a mad rush by councils eager to reach Blair’s target of making 95 per cent of social housing comply with his Decent Homes Standards by 2010”.

Regulation should indeed be smart. But the government’s policy of taking out two regulations for every one introduced seems like just abolishing regulation for the sake of it.

Letwin once said “the call to minimise risk is a call for a cowardly society”, as part of a “Tory offensive against excessive intervention by government in areas where people should be allowed to judge for themselves”.

And it’s this culture of protecting business growth rates and profits at any cost which stands accused of causing the Grenfell Tower fire to be so catastrophic. It will take a considered inquiry to expose this. And we’ll have to take Monbiot’s advice and make some serious noise to see that happen.

– Follow Double Down News for more of their work.