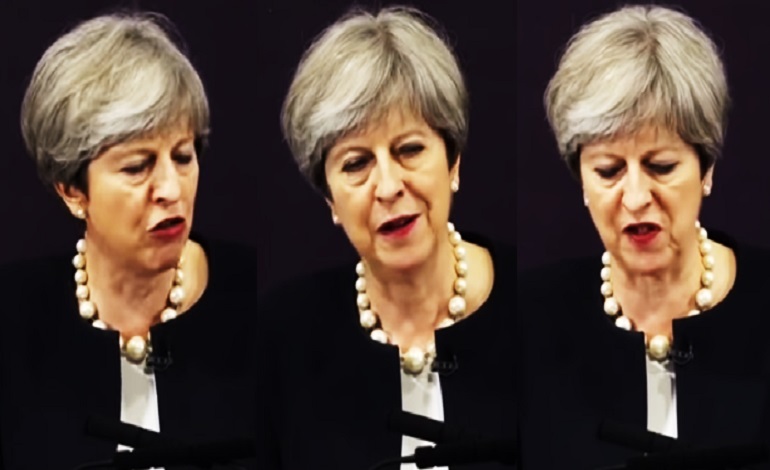 On Tuesday 11 July, Theresa May gave an astonishing speech at the launch of The Taylor Review of Modern Working Practices. In no uncertain terms, it was nothing short of repulsive.

The PM was launching the review, which aims to address the ‘gig economy’, self-employment and cash-in-hand work, and the problems that arise for people in these types of jobs. But May’s speech, setting out her vision for employment in the UK, seemed totally unaware of the damage her party’s policies have caused over the past seven years.

Think of a household where a mum or dad, a brother or sister, or a grandchild, moves into employment. They can gain the security of a regular wage, the opportunity to plan for the future.

Except seven years of Tory rule has created none of the things May mentioned. Zero-hours contracts have skyrocketed, with around a million people now in such unstable work. Poverty has spiralled out of control, with 14 million people now living below the breadline; while officially only 1.6 million people are unemployed. And four million of those in poverty are children; of which 66% are in working households.

But May doesn’t seem to be aware of any of this. Or maybe she doesn’t care, as she continued:

A child can grow up seeing a parent go out to work everyday, and inwardly form the expectation that they will do the same.

But under the Conservatives, young people from poorer backgrounds are facing a tough time if they want to go to university. A report by the Institute for Fiscal Studies (IFS) found that, due to tuition fees, students from the poorest 40% of families will leave university with £57,000 worth of debt. This is compared to £43,000 for the richest students. And the IFS figures also show that many students will still be paying off their debt when they’re in their 50s.

Imagine that child a few years later, taking the step from education into employment, and starting her working life on the front foot. She is setting herself on the road to a fulfilling career and a happier life.

May’s assertion is, of course, assuming the young girl in question doesn’t have mental health issues. Because as The Canary previously reported, the charity Childline’s figures for last year make for worrying reading. The organisation said it received around 53 calls a day relating to suicidal thoughts, equating to 19,481 sessions last year alone. This figure is double the number Childline received in 2011. It also reported an 87% increase in children saying they could not access mental health services: 3,250 calls in total. Most blamed lengthy waiting lists for services, a lack of information, or a refusal to help.

So after May has helped UK children become saddled with debt and left them living with mental health issues, she can turn attention to their parents. She said:

Imagine her father, who might have been unemployed for years, who might have given up all hope of working again, getting a job thanks to the tailored support of Universal Credit. He will have helped himself, his family and the whole country.

Except Universal Credit is, so far, helping no one. The project has been fraught with delays and costly technical failures. Worse, there have been major impacts for those reliant on the welfare state. One council recently complained to the government after delays in Universal Credit payments meant tenants were left unable to pay rents on time. These delays in payments are now forcing people into homelessness due to inability to pay housing costs. And the charity End Child Poverty has also linked Universal Credit to the rise in child poverty.

May concluded her sermon by saying:

That is the real value of work, and we should never lose sight of it.

But if the real value of work is poverty wages, precarious employment, long hours, few protections, and suffering children who have little chance of a bright future, then it must be the Tory vision of UK employment. Because it’s surely not the one most of us have.

If you can stomach it, watch May’s full speech here: