Britain First finally gets caught telling the truth about its plans 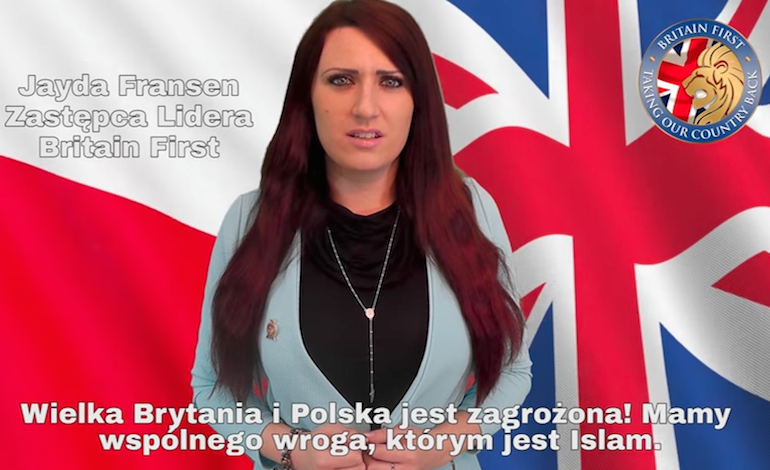 The far-right party has posted a series of videos trying to woo Britain’s large Polish community. BBC Trending has highlighted the videos, which have been posted over a long period of time, saying:

A string of Britain First videos that seem designed to attract a Polish audience have appeared online. Recent ones include a video from Jacek Miedlar, a Polish far-right former priest, an interview with a Polish media outlet that has over half a million views, and videos by Polish Britain First supporters encouraging others to support the party.

Its videos also include a subtitled “message to the Polish community living in Britain” from 2016, in which the group’s Deputy Leader Jayda Fransen says:

Britain and Poland are under attack. We have a common enemy. And that enemy is Islam… Britain, just like Poland, is a Christian nation… Britain First is proud to have a growing number of Polish supporters, members and activists, and… together we will take Britain back.

It sounds laughable that a party with a manifesto based on stopping immigration is now trying to win over immigrants. But it’s not.

While the majority of Britain’s Polish community is resistant to the far right, Britain First has certainly found some dedicated support. In early July, one year after the murder of Jo Cox by a man repeatedly shouting “Britain First”, a Polish national living in London called for German Chancellor Angela Merkel to be shot.

Marian Lukasik, a prominent Britain First supporter often photographed with Fransen, was asked for his opinion on Merkel’s refugee policy. He replied:

Shoot her into pieces. This is the only solution. If this whore remains in charge it will just get worse. There will be terrorist attacks and so on.

Far-right extremists from Poland have also tried to join Britain First rallies in the UK. Jacek Miedlar, the antisemitic and Islamophobic former priest whose video has been shared by Britain First, was among activists detained at UK airports when they were on their way to a Britain First rally in June 2017.

shows the deepening links between European extremist networks – and the esteem with which Poland’s thriving ultranationalist scene is held by the far-right around Europe.

Rafal Pankowski from the Never Again Association, a Polish charity monitoring far-right activity, has warned about the radicalisation of some in the UK Polish community:

It is time for British authorities and organisations to wake up to this issue.

He has also told the BBC that Britain First was capitalising on a rise of far-right politics in Poland:

Unfortunately the Polish people in the UK have been victims of discrimination and hate crime especially since the Brexit referendum. And some of them have been turning to Polish far-right nationalist groups for a sense of belonging.

The videos put the lie to Britain First’s claims that its opposition to immigration is based purely on “space, not race”. They clearly show that the group has no problem at all with white immigrants from Christian countries. It’s Muslims they want to keep out.

As a spokesperson for anti-fascist group Hope not Hate said:

The fact that it’s inviting some of Europe’s most notorious and vile extremists to the UK speaks volumes about where its true ‘patriotism’ lies.

In many ways, Britain First is a joke. It’s the anti-immigration party that wants to recruit immigrants. It’s also the party that recently called for a boycott of Cadbury for making chocolate ‘halal’. And it’s a party with a real-life following of just a handful.

But at the same time, this is a party of thugs that likes to barge into mosques and terrorise worshippers. It’s a party that’s called on its supporters to attack politicians and journalists they disagree with. And it’s a party that has a Facebook following of millions.

Either way, one thing is clear. This is a party whose hypocrisy has been utterly laid bare for anyone who believed it wanted to do anything other than push its hateful and Islamophobic agenda.