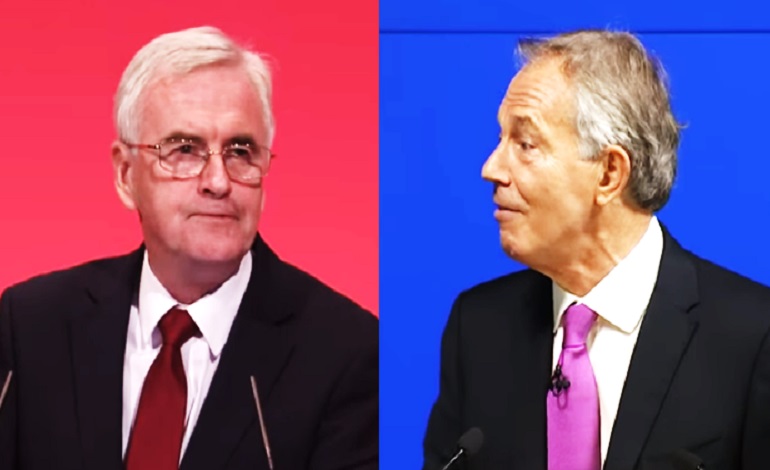 John McDonnell has hit back at Tony Blair’s remarks over the direction of the Labour Party under Jeremy Corbyn. And in a decisive move, the Shadow Chancellor said the former PM “hasn’t listened” to ordinary people.

McDonnell was responding to comments Blair made on both Sky News and in a comment piece for iNews. Blair said that it was wrong of the Labour Party to be pursuing “essentially… the same policy as the government” in terms of Brexit and leaving the Single Market.

Blair claimed Brexit would happen, but only if the will of the people didn’t change; nodding to the fact that a second referendum might be on the cards. He asserted this because he thinks, the election of Macron in France showed that the EU could reform.

And Blair also attacked Corbyn’s general election result, saying that he wanted the party to “recapture” the centre ground. And that Corbyn’s politics were “populism”; not really supported by many people who voted Labour. He said that Brexit followed by Corbyn being elected as PM would put the UK “flat on our back”.

But McDonnell was having none of it. As The Guardian reported, the Shadow Chancellor told Sky News that:

We do recognise the results of the referendum of a year ago… We believe we can achieve that traditional British compromise of bringing people back together again… That is what we need now. What we don’t want is to have divisions in the country again. To be frank, Mr Blair hasn’t really listened to the nature of the debate that is going on in the pubs, the clubs and school gates.

McDonnell also said that the result of the referendum had to be respected. And he noted that:

While the debate about Brexit continues, given Labour’s recent success, it’s Blair’s comments about the Labour Party under Corbyn which are perhaps the strangest.

Since the election on 8 June, Labour has surged in the polls. And the party under Corbyn has now set a new record; polling company YouGov has put Labour on 46% – its highest ever ranking. This now puts Labour 8% clear of the Tories (38%). The poll also puts Labour ahead[pdf] of the SNP in Scotland (36%/31%). Corbyn’s party also leads in all areas of the UK except the south. And Labour has managed to gain[pdf] both Conservative (3%) and Lib Dem (29%) voters from the general election.

Blair has repeatedly shown that he is indeed not listening to ordinary people. His constant political interventions have been met with criticism and derision from many. And this one is no different. It could be said that it was time for Blair to ‘put up or shut up’. But seeing as he’s not even officially a politician anymore, maybe he should just do the latter.