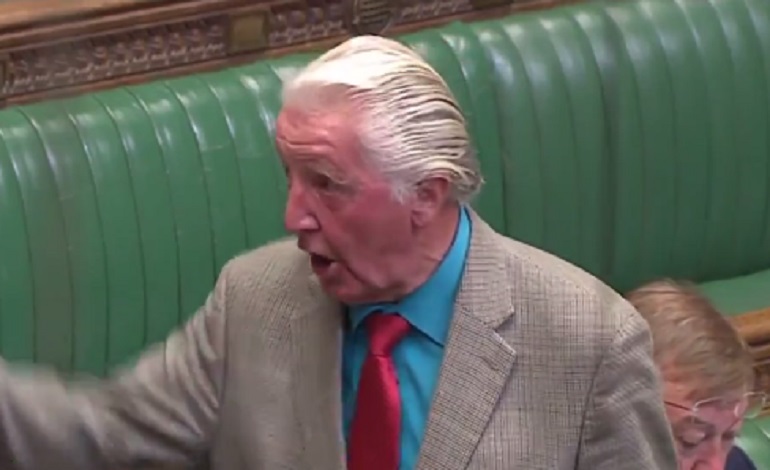 Dennis Skinner has called the “small fortune” the government is spending on the world’s most expensive rail project an “outrage”. And the veteran Labour MP didn’t hold back when it came to his concerns over HS2, the high-speed rail link between London and the North.

A “small fortune” for a slice of vanity?

On Monday 17 July, Skinner raised the issue of HS2 in relation to the demolition of homes as a Point of Order in parliament. His question followed a debate about housing; hence the MP’s angle on the rail project.

Skinner raised concerns he has that “a lot of houses in my constituency will be demolished”. He also noted that the HS2 money could be better spent on the electrification of the Sheffield rail line “all the way to London”.

should be debated at length, because it’s going to cost the taxpayer a small fortune… this is an outrage and that’s why I raised the matter along with my honourable friends today.

And Skinner isn’t far wrong. As The Canary previously reported, the cost of HS2 is now officially spiralling out of control.

The Department for Transport (DfT) asked [paywall] rail expert Michael Byng to work out the cost of HS2. But this only happened after he was commissioned by the Rail Delivery Group to work out how much money was needed for the section of the railway from its terminus at Euston to Old Oak Common in West London.

Byng said that the cost of that particular section would be £8.25bn. And when the DfT found this out, Byng said he got a phone call from the department, asking [paywall] him:

Look, if 6.6 miles is going to cost us £8.25bn, what chance have we got of getting to Birmingham?

He then worked out the figures. And he found [paywall] that:

This is double the government’s official costing of £52bn. And it is 15 times more expensive than the HS2 equivalent in France, the TGV.

Byng reckons [paywall] that HS2 “is certainly the most expensive railway in the world”. But could the money be better spent elsewhere? At a time when the NHS and social care are underfunded, public sector staff are being denied a pay rise, education budgets are being cut, and disabled people are having their human rights “gravely” and “systematically” violated – many would argue that yes, it could and should be better spent.

As Skinner rightly says, parliament needs to debate HS2 at length. Because it’s not only the implications on the public purse that are worrying, but the housing and environmental ones as well. It’s an outrage that the government is steamrolling this project through. And the public need more voices like Skinner’s speaking up about what has perhaps become the biggest white elephant on the planet.