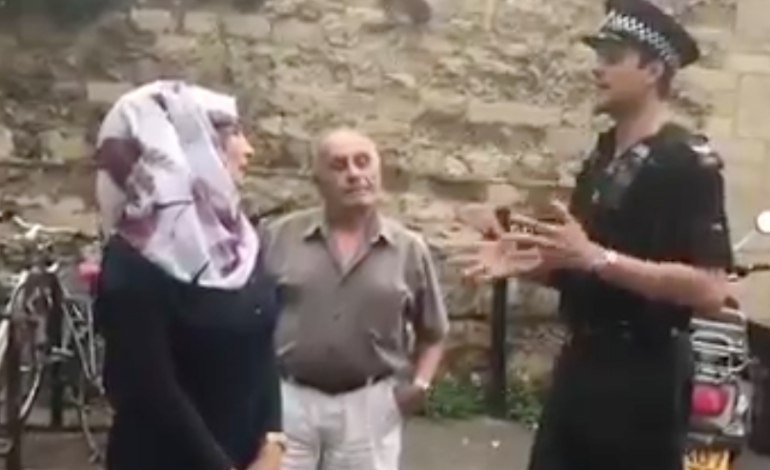 A Muslim woman in Oxford sightseeing for the day was subjected to a humiliating ordeal by Thames Valley Police. And to make matters worse, one officer lied and threatened her to try and trick her into giving her name and address.

You match the description

The video begins after the woman has already been stopped by Police and Community Support Officers (PCSO). She states:

You see all these people that are walking past? They’re looking at me like a criminal. Because you’re standing there and you’ve stopped me for no reason.

The PCSO questions why she is refusing to give her name and address to them. He then tells her:

We have reason to believe that you match descriptions of people that we’re interested in round here.

But although the woman offers to let him search her bag, he refuses and instead threatens her:

Police officers are on their way down, OK, and should you refuse at that point, OK, there is a possibility that they can arrest you.

The woman then further questions him:

He repeats his point about matching descriptions and the woman interjects, pointing at her headscarf:

The officer vehemently denies it. But the woman is insistent:

It does… Today it seems to be the Muslims.

There’s a thief in the area

Again, the officers try and justify why they’ve stopped her:

The crime at the moment? OK. We’ve had people going around stealing stuff from people.

But the woman isn’t impressed:

I look like your typical thief? … I’ve come to snatch things from people wearing high heels, because that’s going to be my getaway.

And she tells him about her day out:

This is a crappy impression of Oxford that I’ve got… I’ve come down here for two hours, sightseeing, taking some pictures, going about my business. But you lovely people have stopped me because I fit the description of a robber or a thief.

Two regular police officers then arrive and the woman is surrounded by six officers in total. One repeats the same mantra as the PCSOs and claims that, if at a later date they get CCTV of the thieves, they will be able to rule her out. But as she points out:

If you get CCTV, it’s not going to give you the criminal’s name and address.

The officer just continues asking for her name and address until, finally, he ends up lying:

But Section 50 of the Police Reform Act only applies if the officer has a reasonable suspicion that a person is engaged in antisocial behaviour. At no point does the officer suggest this is the case. And he proves himself that he does not have this suspicion by describing her as “polite” and “co-operative”.

The woman knows her rights, refuses to give him her details, and directly challenges him:

But the officer clearly doesn’t want to do either. And he can be heard on his radio saying:

To which the woman points at her headscarf:

This is a light headscarf.

And then, magically, the officer is able to rule her out of their inquiries without her giving any details. But he refuses to apologise.

Speaking to The Canary, Kevin Blowe, co-ordinator of the Network for Police Monitoring (Netpol), accused the police of ethnic profiling:

Unfortunately, this kind of racialised conduct by the police towards black and Asian people is all too common.

Blowe also stated that neither the PCSOs nor the police officers knew the law regarding the stop:

It is clear the Police Community Support Officer who first spoke to the young women in the video had no clue about the limits of his powers. Unfortunately, neither did the police officer who subsequently attended. If he was genuinely concerned about criminal activity nearby, he would have carried out a search under section 1 of the Police and Criminal Evidence Act (PACE) – which does not require the young woman to give her personal details.

Instead, he attempted to misuse ‘Section 50’ powers intended solely for tackling anti-social behaviour, which does require you to give your name and address.

He praised the actions of the woman:

Faced with the humiliation and inconvenience, most people would back down. We should all applaud the brave young woman who stood up for her rights by refusing to be bullied.

And Blowe offered advice to anyone finding themselves in a similar situation:

Our advice is: if you are out on the street and the police stop you to account for your actions or to search you for an alleged criminal offence, you do not need to provide personal details unless you are the driver of a car.

A safe place to visit

But Thames Valley Police denied that its officers did anything wrong. A spokesperson told The Canary:

It is clear in the film that the woman was spoken to because she matched a description of a person carrying out thefts from people in the city centre. It was explained quite clearly several times that this was the only reason for her being stopped. It is common police practice to stop people who match descriptions of potential offenders in the near vicinity.

To this end, we are constantly working with the community to make our city a safe place to live, work and visit.

But it is clear that the actions of these officers did not make Oxford a “safe place” to visit for this woman and her family.

But in the worst case scenario, as Blowe asserts, this is ethnic profiling.

Either way, there are serious questions that Thames Valley Police and these officers need to answer.

– Find out more about your rights under Section 50.