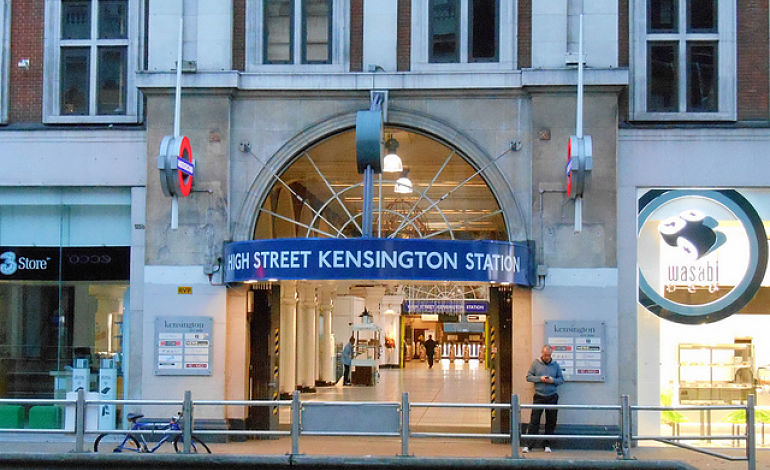 Residents in the Royal Borough of Kensington and Chelsea (RBKC) are under pressure once more. After the media furore over RBKC’s treatment of Grenfell Tower survivors, seven vulnerable women and their children have battled to remain in the borough; because moving would be devastating.

The Canary spoke to the women as they waited for council officers to see them on Monday 31 July.

The seven women currently live in a refuge managed by Hestia, a charity providing housing support. And the property is owned by the Notting Hill Housing Trust (NHHT) housing association.

With six children among them, aged between two and seven, the women have lived there for varying periods over the last year, having fled domestic violence. While the residents were content in the property and settling into the area, over the preceding two weeks the property’s conditions have slowly deteriorated.

One woman told The Canary that she moved to the refuge with her daughter thinking they’d be safe. She said: “We enrolled in local schools, got involved in local charities. We tried to rebuild our lives after we got displaced, essentially.”

She explained that they had some problems with the property over the preceding two weeks, including the fire alarm going off all the time. And a leak coming through the ceiling gradually got worse. On the evening of Friday 28 July, the ceiling actually started caving in on the upper floor, so they moved downstairs. All of the women and children have been staying in the living room and sleeping on mattresses on the floor ever since.

They asked Hestia to do something. But the only option the charity gave them was to move to a refuge in Barking, approximately 12 miles away; something they’re unwilling to do for seemingly good reasons.

On the morning of 31 July, Hestia turned off the electricity. According to the women from the refuge, Hestia expected them to leave the property and started ignoring their phone calls, which is when they came to the council.

It’s the children who feel it

Blissfully unaware, the children were playing in the council’s reception area and excitedly said: “We had a pyjama party last night!” referring to their stay together in the living room. One of the refuge’s residents said that it was really hard for the kids because they don’t fully know what’s going on. Moving around so much has had a clear effect on them.

One of the women described what impact moving would have:

Barking is too far. My solicitor is here. I’m still waiting for the benefits here. If I have to move, they won’t pay me until I get settled over there. I literally [just] settled here. We’ve just moved. I was taken to India by force by my husband and was being abused so came back. My children are already stressed.

And it’s the impact on their children that the women feel most concerned about. Several of them said their kids were more excitable and jumpy; and the faulty fire alarms going off all the time didn’t help matters. “The minute it goes off they’ve been going ‘fire, fire, fire’ and they all know about Grenfell Tower.”

Moving again means the children moving school again and disrupting their routine. But the disruption is true for all the residents, including a couple of single women who have had to move repeatedly. And the prospect of moving once more was visibly stressful, particularly after their experiences with domestic violence.

One 30-year-old woman, clearly emotional, told The Canary about her frustrations of waiting out the four-month period before the council could permanently house her, and then having to move again. She said: “I don’t have the energy, I’m not that strong.”

Most worrying, however, is that Barking is completely inappropriate for several of the women concerned. With ex-partners that have connections there, it’s a no-go area. As one of the women explained:

When you go to a refuge, they make you sign a contract stating you won’t go to specific areas where you will be unsafe. I would be in breach of that contract because it’s one of my danger areas.

The response from inside the borough

On Sunday 30 July, a journalist put the women in touch with Labour MP Jess Phillips. Phillips wrote to the council that night with specific questions for Hestia, NHHT, and the council itself. She essentially asked the parties for reassurances that they would make the necessary repairs, and that the women would not have to move out of the borough.

Hestia responded to The Canary‘s request for comment with the following statement:

Hestia is commissioned by RBKC to provide the domestic abuse support.  Notting Hill Housing Trust provides the maintenance for the building and manages the property.

At 1.58 am on Sunday 30 July, Hestia’s on call manager received a call stating that water was leaking through the ceiling and the fire alarm had gone off.  The fire brigade attended, and the Notting Hill Housing Trust emergency repairs team were called, as per procedure.

Hestia’s on call manager spoke to each of the women individually during Sunday 30 July and offered them safe passage to a secure overnight room.  It was explained to each of them that this was overnight accommodation only and they would be transferred to RBKC as soon as the house was safe.

The women decided that they would prefer to remain in the secure rooms in the refuge overnight (Sunday 30 – Monday 31 July).

On the morning of Monday 31 July the housing repairs team from Notting Hill Housing came to make repairs and the property  should be safely habitable by the end of the day for anyone who strongly wants to return at that stage. For others we are working with Hestia to provide emergency hotel accommodation in the local area while further repairs and decorative work is completed.

This issue should have been straightforward, with NHHT making the repairs in good time. But the women believe it has purposefully let the property go to ruin. Ultimately, they think that NHHT doesn’t want a refuge based in central London.

And it’s important to note that this is all occurring against the backdrop of ongoing social cleansing in the area. Council-owned estates are slowly being earmarked for demolition, such as the Silchester Estate. This is to make way for new property developments. The wider picture is that housing associations are also reducing the amount of affordable and social housing stock they own in favour of more profitable properties.

For example, as The Canary previously reported, Genesis Housing Association has been accused by tenants of neglecting their properties. And their financial reports reflect that they have been driving down operating costs despite making millions in surplus. There are now plans for NHHT and Genesis to merge. And the Genesis Residents Action Group has already voiced its concerns to The Canary of what this might mean:

I can only imagine that this will make things worse and their tenants and leaseholders even more insignificant.

The right thing to do

NHHT and Hestia have conceded and allowed the women to stay in the area. This is the right thing to do and has avoided the council, in particular, some embarrassment. These services ultimately reflect on RBKC, and it won’t want more bad press after the fallout from the Grenfell Tower fire. But it took a fight by the women, and it wasn’t easy.

These women, like many others, represent the collateral damage on the frontline of social cleansing.

– Write to your MP if you are concerned with social cleansing in your area.