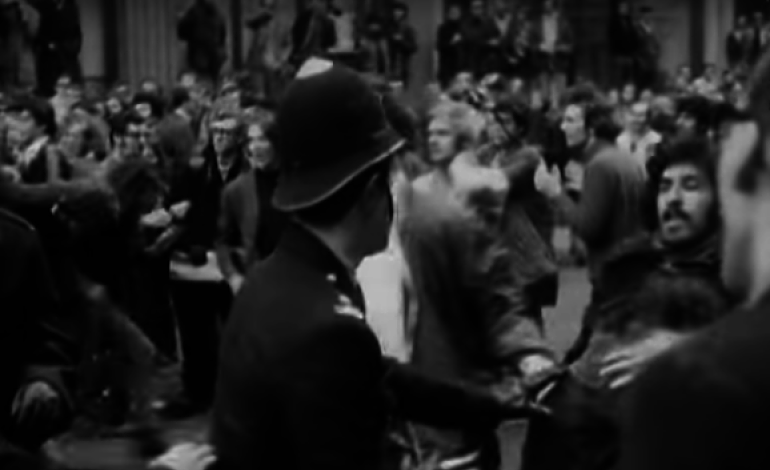 The cover names of three police officers who spied on political activists have just been revealed by an inquiry into undercover policing. The three officers infiltrated high-profile campaigns at a time of great public anger.

Inquiry documents and secret intelligence reports reveal just how far the state went to undermine opposition to injustices. And understanding the response to that overreach is crucial to understanding what’s happening now.

A time of wars and strikes

The three undercover officers (UCOs) were assigned with the Special Demonstration Squad (SDS) and were operational from 1968 to 1976. Their cover names are Rick Gibson [pdf] (deceased), Douglas Edwards [pdf] and John Graham [pdf]. An outline of their undercover activities is given in each document. The three infiltrated a number of political campaigns and organisations, including [pdf] the Troops Out Movement, the Vietnam Solidarity Campaign, and a number of anarchist groups.

At the time, Britain was engaged in military operations in Northern Ireland that saw 13 civilians killed by British troops on ‘Bloody Sunday’. Britain’s ‘dirty war’ in the country reportedly left many more dead. The UK was also actively supporting the US in its war on Vietnam. But the authorities had not appreciated the level of discontent this would cause. And on 17 March 1968, a mass rally at Trafalgar Square saw 8,000 of the protesters break off to head for the US embassy in Grosvenor Square. The ensuing battle was a key moment, with 300 protesters arrested:

But the police learned lessons from Grosvenor Square. And ahead of a follow-up demo in October of that year, a Special Branch document provided a list of around 50 ‘leaders’; while another report revealed anticipated numbers of activists and properties that could be targeted. Such intelligence would undoubtedly be useful to UCOs.

But the state feared far more than mere protests and another Special Branch document warned of revolution: 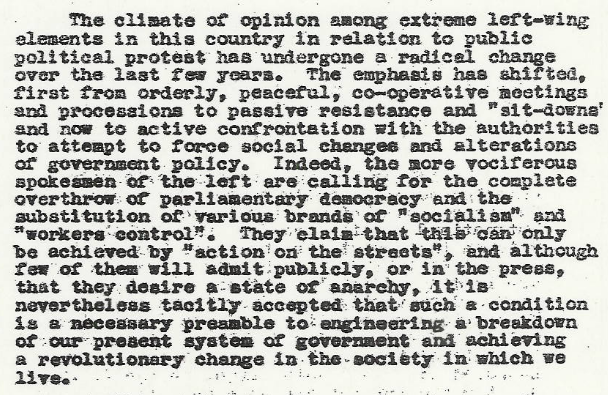 This assessment was not far off the truth. Because the militancy on the streets was followed by another form of resistance.

The Angry Brigade (AB) appeared from nowhere, but carried out highly targeted attacks on government and police properties:

Journalist Martin Bright summed up the political climate the AB existed in:

It is difficult now to imagine the intensity of the times. Edward Heath was locked into a lengthy dispute with workers who occupied the Clydeside shipyards in Glasgow, which would eventually end with a humiliating climb down for the government. Internment was introduced in Northern Ireland and the Bloody Sunday massacre of civil-rights marchers in January 1972 happened while the Angry Brigade suspects were awaiting trial. One document found in the raids across London that weekend brought the three causes together in a mini-manifesto: ‘Put the boot in – Bogside, Clydeside – Support the Angry side’.

The AB was operational for 12 months from August 1970.

It’s known that the SDS used around 100 covert identities to infiltrate organisations and provide intelligence between 1968 and 2008. Possible targets of covert policing would have included industrial disputes, such as the Grunwick dispute, the Shewsbury pickets campaign, and the 1972, 1974 and 1984/5 miners’ strikes.

But all this was just the tip of the iceberg. According to whistleblower Annie Machon, MI5 considered many public figures of the day worthy of surveillance, including John Lennon, Jeremy Corbyn, Mark Thomas, Tony Blair and Harold Wilson.

The SDS was not just a child of the 60s and 70s. Its work – and that of other undercover policing units – continued over subsequent decades. And Her Majesty’s Inspectorate of Constabulary subsequently revealed that a massive 3,466 undercover operations took place in England and Wales between 2009 and 2013 alone.

The Undercover Policing Inquiry was set up in 2015 to examine some of the practices deployed by these units. But it’s taken two years for a small number of cover names of UCOs to be released. The inquiry will reveal more in due course. But as The Canary has reported, many undercover policing files have gone ‘missing’.

Citizen activists are demanding the release of real names too. Because many UCOs formed sexual relationships as part of their cover. Indeed, former UCO Andy Coles (his real name) was exposed earlier this year – not by the inquiry, but by independent researchers. And now, he is under pressure to resign as councillor with Peterborough City Council. The inquiry has agreed that the then young woman he allegedly exploited will be a ‘core participant’ in its investigation.

Regardless of the difference in technologies used, there are clear parallels between the political policing of earlier decades and of today. Moreover, public anger about the same injustices is no less palpable.

– Check out the Undercover Research Group and the Campaign Against Police Surveillance.