A Polish immigrant controlled by evil Romanians, with a rat on his shoulder? We have reached peak Daily Mail [IMAGES] - The Canary 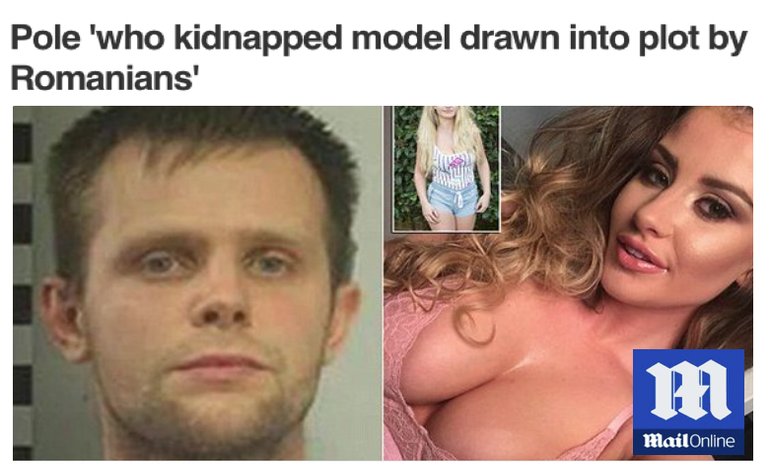 If you were playing Daily Mail bingo, a new story published by the right-wing tantrum-mill just gifted you a full house. We may have witnessed the most Daily Mail article of all time.

The kidnap of Chloe Ayling

20-year-old model Chloe Ayling went to Milan for what she thought would be a career-making photo shoot. Instead, she was drugged and kidnapped by a sex trafficking ring which tried to sell her as a sex slave on the dark web for £230,000. Ayling was allegedly bound, gagged, thrown in the boot of a car, and spirited away to rural Italy by the gang. Local media reports state that the gang released her without payment or harm after discovering she has a child.

The south-Londoner spoke to the press from outside her mother’s home, saying:

I’ve been through a terrifying experience. I’ve feared for my life, second by second, minute by minute, hour by hour.

I’m incredibly grateful to the Italian and UK authorities for all they have done to secure my safe release.

How did The Mail run such a sensitive story?

Pole 'who kidnapped model claims he was drawn into plot by Romanians' https://t.co/Ekjt1JSgLD

For The Mail, this terrifying crime against a young woman features the holy trinity of Daily Mail outrage: sex, bigotry and conspiracy. You can almost hear the editorial meeting:

A shady gang of eastern Europeans plus a buxom beauty? This should have readers hate-wanking for the foreseeable!

And you’ve not heard the best bit. The Pole used to walk around with a *rat* on his shoulder!

The Romanian-led evil Pole with a rat on his shoulder

The Mail refers to alleged perpetrator Lukasz Herba as a “Pole” throughout the article. And not only is he a Pole, but his gangmasters are Romanian. It breathlessly regurgitates every titbit of local gossip, including that Herba allegedly walks around with a rat on his shoulder. The Mail is basically screaming:

Beware the new wave of Eastern European pirates! They smuggle women instead of rum! And instead of a parrot on their shoulder, they carry a f*cking rat!

And then, of course, The Mail throws in not one, but seven sexualised shots of Ayling. As shown in the image below, grim details of the crime are partnered with glamour shots of the survivor posing in swimwear:

The Mail has the nerve to objectify the survivor in the same breath as claiming outrage on her behalf.

But the worst bit is, The Daily Mail is not alone.

This story has been covered in pretty much the same way across the UK media. And while outlets like The Independent used subtler headlines, the components of the story remain the same. The Pole, the Romanian gang, and a bunch of semi-nude pics of the survivor. The intention is to leave readers stimulated – afraid, angry and aroused. Britain needs the press to serve as the Fourth Estate, holding power to account. Instead, they’re serving as second-rate soft porn merchants – titillating the senses and nurturing bigotries for profit. And as recent events have shown, they might just be securing their own extinction in the process.

– You can make a complaint about the story to the Independent Press Standards Organisation (IPSO) here.