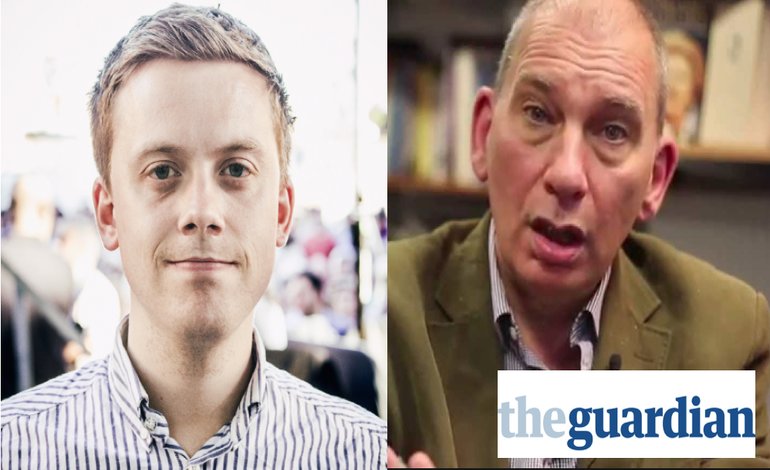 Two of The Guardian‘s best known columnists are engaged in a Twitter war which has caught the public’s attention. But what brought Labour supporter Owen Jones and arch-neoliberal Nick Cohen to blows?

It all started with Cohen’s assertion that The Canary backs Donald Trump.

This is simply not true; as any simpleton capable of an internet search could reveal. In fact, you can view The Canary‘s previous articles on the tangerine tycoon here. But Cohen doesn’t make his case because it’s true. He makes it so he can get his tired old point across: that there is an ‘alt-left’ in Britain as dangerous as the ‘alt-right’ in the US:

And he was not alone:

@NickCohen4 has made the journey from disgrace to journalism to disgrace to humanity in one short tweet 👏👏👏😒 https://t.co/eexwFcjZ45

The idea that Nazis and people who oppose Nazis are somehow equatable is the most batshit fucking crazy shit I've ever fucking heard.

Cohen then attempted to portray the reaction to his offensive tweet as some sort of witch hunt by that dangerous ‘alt-left’. He claimed Jones had misrepresented his criticism of The Canary, and denied that he meant to argue that the ‘alt-left’ was the equivalent of the ‘alt-right’: 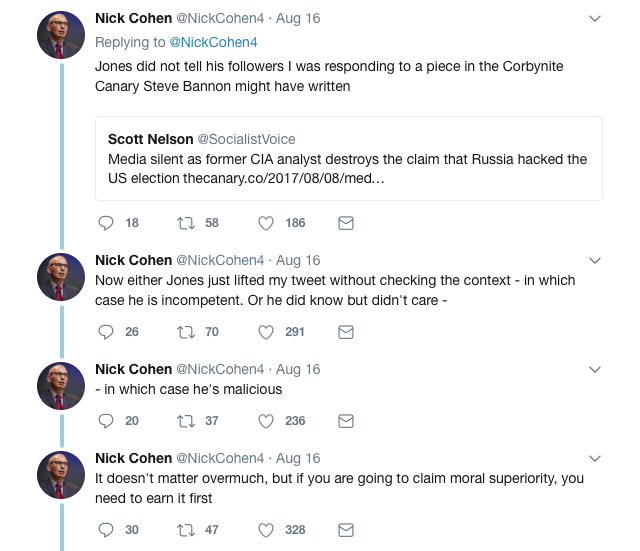 This was an attempt to embarrass Jones, who has also been publicly critical of The Canary.

But Cohen has spent years demonising the left as the moral equivalent of the far right. Again, the simplest search of social media (and Cohen’s past columns) is all it takes to establish that fact:

Nick Cohen's view is what he calls the "far left" (which, for him, *includes Corbynism*) is basically the same as the far right. pic.twitter.com/DG3UqWUldI

Who is Nick Cohen, anyway?

Cohen is a trollumnist. A resident troll, paid by The Guardian/Observer to spew his bile in the direction of the left. His writing aches with tired clichés about the left which he hasn’t bothered to refresh since Super Gran was current.

His attitude was fully realised in his piece entitled Don’t tell me you weren’t warned about Corbyn. It is a finger-pointing lecture to working-class voters to ditch Corbyn. Predicting an historic electoral majority for Theresa May over the Labour leader, Cohen tells Corbyn supporters what they should do the morning after the election:

In my respectful opinion, your only honourable response will be to stop being a fucking fool by changing your fucking mind.

Of course, Cohen was as thumpingly wrong on this as most other things. Corbyn went on to increase Labour’s share of the vote by more than any leader since 1945, ending the Conservative majority. But the author did not take his own advice. Instead, he continues to denounce an ‘alt-left’ which simply does not exist.

Researchers who study extremist groups agree that there is no ‘alt-left’. As Anti-Defamation League analyst Mark Pitcavage told The New York Times recently:

It did not arise organically, and it refers to no actual group or movement or network. It’s just a made-up epithet, similar to certain people calling any news they don’t like ‘fake news.’

Like many of his peers, Cohen displays a revulsion response to the labour movement of working-class people. And he throws around terms like ‘alt-left’ and ‘fake news’ in the hopes of delegitimising that movement – and any media outlet, pundit or politician who speaks in its favour.

Not so very long ago, Cohen wrote:

The English upper-middle class has always turned vindictive when the lower orders emerge from the underground and get ideas above their station.

– You can learn more about the grassroots labour movement Momentum here.

– You can learn more about the Labour Party here.