Veterans ask Trump to show some respect to the Charlottesville victim. They get the middle finger. [TWEETS] - Canary 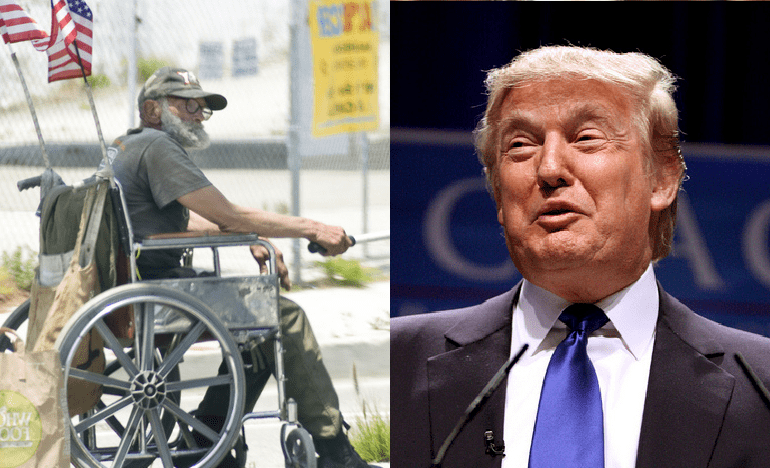 Common Defense, a grassroots organisation of over 100,000 veterans, asked Trump to show some respect to Charlottesville victim Heather Heyer. But the US President gave them the middle finger:

As Veterans, we told Donald Trump that the way to honor Heather Hayer is to unconditionally oppose white supremacy & hate. He blocked us. pic.twitter.com/cSGxU6ZjVs

Trump apparently has no problem silencing war veterans who challenge him on the far right.

On 12 August, a white extremist march led to violent clashes in Charlottesville (Virginia), leaving Heyer dead and many injured. Responding to the violence, the US President equated KKK members, white supremacists and neo-Nazis with the people who came to challenge their beliefs:

In the same speech, Trump insisted that there were “very fine” people within the Nazi ranks. So when the US President tried to honour Heyer on social media, his words came across as hollow for many. Common Defense said the only way Trump could speak of the 32-year-old paralegal was to denounce the hateful ideology they say led to her death:

Memorial service today for beautiful and incredible Heather Heyer, a truly special young woman. She will be long remembered by all!

#HeatherHeyer represents the best of us. She sacrificed for all of us, standing up bravely. You don't deserve to say her name.

The veterans point out that Trump’s presidency has emboldened white supremacists. They also joined calls for Trump to resign:

There is only one thing you can do now to honor #HeatherHeyer's memory – resign. #VetsAgainstTrump

Millions of us are standing up to follow example of #HeatherHeyer, resisting Nazis, resisting white supremacy, resisting YOU. #VetsVsHate

While Trump’s rhetoric is important, it’s not the only way he’s emboldened the far right. He has also posted fake, racist crime statistics on social media. Brian Levin, director of the Center for the Study of Hate and Extremism at California State University, San Bernardino, said:

We saw a dramatic spike in hate crimes, anti-Muslim hate crimes, in the five days after President Trump’s Muslim ban proposal, and we’ve had more of these mega-large, white nationalist rallies in the last two years than we’ve had in the previous 10 or 20…

Anti-Muslim hate crimes leapt by 91% in the first half of 2017 (compared to the year before), according to the Council on American-Islamic Relations (CAIR). This means 2017 could be “one of the worst years ever” for such incidents, CAIR coordinator Zainab Arain said. He singled out Trump as the leading cause:

The presidential election campaign and the Trump administration have tapped into a seam of bigotry and hate that has resulted in the targeting of American Muslims and other minority groups.

The spike in hate crimes and resurgent far right is a very ugly side to the Trump presidency. But perhaps less expected is his complete disregard of US military veterans.

Trump and any politician who does not condemn him in the strongest terms must go. Now.