If you're using the terms 'alt-left' and 'alt-right', you need to stop. Now. [EDITORIAL] - The Canary 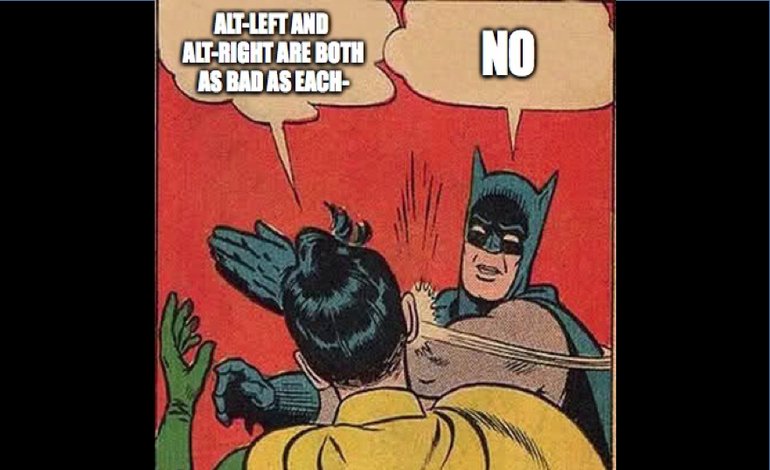 It’s become a trend for Westminster hacks to refer to Nazis as ‘alt-right’, and the sort of people who vote for Jeremy Corbyn as ‘alt-left’. But both terms were invented by the far right. ‘Alt-right’ was created to distance modern Nazis from their awful history. And ‘alt-left’ was created by the same groups to make out that racists and people opposed to racism are one and the same. A lazy and dysfunctional media has hijacked the term ‘alt-left’ to the same ends. But we don’t have to play along.

What is the ‘alt-right’?

The term ‘alt-right’ was coined by a leading US white supremacist, Richard Spencer, in 2010. It describes the modern US white supremacist movement, which opposes ‘multiculturalism’ and seeks to restrict the rights of non-whites, women, Jews, Muslims, LGBTQ+ people, immigrants, and other minorities. They reject the central ideal of democracy: a nation of citizens equal under the law regardless of ethnicity, gender, sexuality or any other arbitrary distinction. They instead wish to establish the US as a white supremacist ethno-state. That means a state of white people, for white people.

In 2016, The Associated Press gave strict guidance to journalists about the use of the term, warning:

Avoid using the term generically and without definition, however, because it is not well known and the term may exist primarily as a public-relations device to make its supporters’ actual beliefs less clear and more acceptable to a broader audience. In the past we have called such beliefs racist, neo-Nazi or white supremacist.

We should not limit ourselves to letting such groups define themselves, and instead should report their actions, associations, history and positions to reveal their actual beliefs and philosophy, as well as how others see them.

The movement is also wiling to use violence and intimidation to achieve its goals. Labour MP Jo Cox was stabbed to death by a white supremacist who yelled “Britain First!” while he killed her. In the US, the ‘alt-right’ marched on Charlottesville (Virginia) recently carrying tiki torches and chanting Nazi slogans. When they were met with opposition from anti-racist protesters, one of their number ploughed his car into the crowd. 32-year-old Heather Heyer was killed by a white supremacist for standing up for the values of equality and justice.

Opinion: "US white supremacists and Neo-Nazis are no longer afraid of showing their faces" https://t.co/0KU08J8AiJ #Charlottesville pic.twitter.com/g91IqPGThT

The ‘alt-right’ movement is nothing more than a rebrand of the age-old chauvinistic white supremacist movement. By using the term, we create them as something new and different to what has come before. We allow them to distance themselves from the bloodstained history of the KKK and the Nazis.

There is no such thing as the ‘alt-left’. It exists only as a derogatory term. It was invented by the far right to create a false equivalence between racism and anti-racism; to argue that agitating for the genocidal white supremacist movement is morally equivalent to agitating for equality and peace.

Researchers who study extremist groups agree that there is no ‘alt-left’. In an email to The New York Times, Anti-Defamation League analyst Mark Pitcavage wrote:

It did not arise organically, and it refers to no actual group or movement or network. It’s just a made-up epithet, similar to certain people calling any news they don’t like ‘fake news.’

The term first began circulating on white supremacist US conspiracy sites in 2016. And it was later picked up by the likes of Fox News and other right-wing US outlets. But very quickly, the Blairite, ‘centrist’, and conservative media in the UK and US picked it up and used it for the same purpose. As the editor-at-large of The Associated Press, John Daniszewski, states:

It seems to have just been created as an opposite to ‘alt right’… so in some ways it’s a term that is meant to be pejorative, and a label to slap onto people you don’t agree with.

A simple internet search will reveal pages of think pieces from the established media denouncing the ‘alt-left’ and a new ‘alt-left media’. But they had one big problem. Where was the evidence of extremism and violence in the progressive movements they wished to tar as ‘alt-left’? There wasn’t any. So they had to make some up. And so ensued nearly two years of smear campaigns designed to stigmatise the labour movement.

The situation came to a head this week, with the murder of Heather Heyer in Charlottesville. The 32-year-old civil rights activist was killed – and 19 others were injured – when a Nazi terrorist ploughed a car into people protesting the white supremacist march. And the aftermath revealed the real cost of the fake ‘alt-right/left’ equivalence.

Politicians and pundits on both sides of the Atlantic have been quick to call similar outrages ‘terror attacks’ when committed by radical Islamists. But when the attacker is white, and from the far right, different rules seem to apply.

This is how The Financial Times reported the 17 August attack in Barcelona:

But at the press conference in the wake of Heyer’s murder, when members of the press asked Trump to denounce the Nazi terrorist, he replied:

What about the ‘alt-left’ that came charging at, as you say, the ‘alt-right,’ do they have any semblance of guilt?

Disappointingly, the UK media didn’t stray far from Trump’s line. For example, BBC News reported it as a “clash” between rival protest groups. 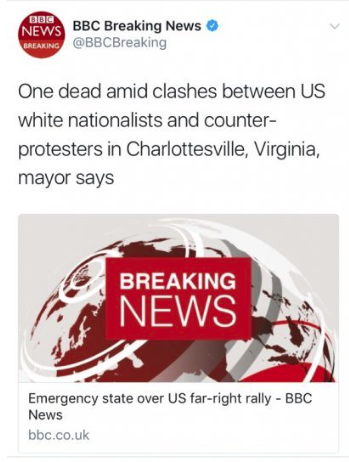 This is dangerous. Socialists have often found themselves fighting on two fronts. Fighting Nazis in the street, while simultaneously defending themselves against a hostile establishment. When Hitler co-opted the Nazi movement, he targeted socialists first. Because by taking out the socialists, you take out the people most likely to stand up for anyone else. Prominent German Protestant pastor Martin Niemöller captured this in his famous poem lamenting the rise of the Nazis:

First they came for the Socialists, and I did not speak out—
Because I was not a Socialist.

Then they came for the Jews, and I did not speak out—
Because I was not a Jew.

It’s time to shut this nonsense down.

The terms ‘alt-right’ and ‘alt-left’ were invented by the far right. They created the term ‘alt-right’ to cleanse their movement of its bloodstained past. They created the term ‘alt-left’ to draw a false moral equivalence between Nazis and those who oppose them. Establishment politicians and pundits have done the bidding of the far right by embracing the terms. And they have done so in efforts to retain power against an empowered and re-energised labour movement.

If you’re using these terms without irony, you are doing the same. It’s time to stop.