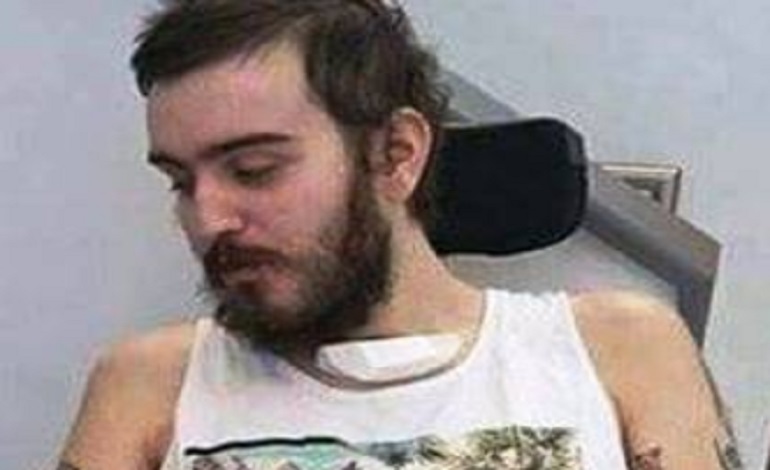 A mother is appealing for help for her disabled son, who she claims faces “death by institutional neglect” in a UK prison.

24-year-old Tom McMeekin from West Yorkshire is quadriplegic, epileptic and autistic. He has heart problems and 70% lung damage, double incontinence and dysreflexia. And he is also serving a seven-and-a-half-year prison sentence in HMP Moorlands for causing death by dangerous driving. But his mother, Sue Goodwill, has now launched a crowdfunding campaign to cover the legal costs of appealing his sentence. This is because, she claims, he is suffering “abuse and neglect” at the hands of the prison service. And she says she wants her son to come home “before it’s too late”.

Goodwill says that, ever since McMeekin was incarcerated, prison staff have “abused and neglected” him. He was originally at HMP Leeds, where she claims he was placed on the medical wing run by Care UK. The company has been named in inquiries into deaths of vulnerable prisoners, along with neglect in residential homes and in homecare contracts.

Goodwill says that McMeekin suffered a 30kg (four stone 10lb) weight loss, hospitalisation due to a deep pressure sore, a lung infection, bladder infections, and life-threatening sepsis. And she also claims that, at one point, staff at HMP Leeds failed to get his prescription collected, so he went four days without the necessary medication.

Without giving a reason, the prison service moved McMeekin to HMP Moorlands where, Goodwill says, things are no better. She told The Canary:

HMP Moorlands has no medical wing. So Tom is on an over-55s, sex offenders wing. But Moorlands’ health care facilities are on next floor up, and he has no emergency buzzer and cannot shout due to the spinal and lung injuries. When I’ve visited Tom he had been left to sit in excrement on numerous occasions. I also witnessed that he once had a blocked catheter. This is highly dangerous as he suffers dysreflexia which can be fatal. If it is not dealt with within an hour it can cause a stroke, cardiac arrest or death.

Goodwill claims that 24-hour care and support should also be provided to her son, but it has never happened.

Goodwill also claims that her son suffers abuse at the hands of the prison staff. She claims that, when he was hospitalised at HMP Leeds, a healthcare assistant at the prison “assaulted” him. He was then taken to hospital in handcuffs; she said that “taking a seven-stone quadriplegic to hospital in cuffs is very wrong”.

But she also claims that McMeekin is threatened and intimidated by prison staff. She told The Canary that no prison staff at either institution “had any understanding of autism”. And she said:

At HMP Moorlands he’s been told that if he complains he won’t be allowed a shower, and that he’ll be put on Block Six, which is renowned for its violence. One of the governors went as far as implying to me that if we pursued legal action he’ll be moved to violent Block Six. The same governor had previously told me the block he is currently on is the safest place for someone who is 100% vulnerable and unable to protect themselves. Also, the Head of Healthcare at Moorlands has said they cannot provide the level of care Tom needs, as they are not an acute hospital.

McMeekin is serving seven and a half years after pleading guilty to causing death by dangerous driving. A court ruled that he caused a car crash which killed George Wharton, 14, and Rhys Baker, 13, and left McMeekin and another passenger with life-changing injuries. Witnesses claimed that his driving on the day of the accident was “aggressive”, “that of an idiot”, and “an accident waiting to happen”.

Judge Peter Collier said that McMeekin “enjoyed drawing attention to the way he drove”. As the BBC reported:

One witness told the hearing [Tom] had driven ‘like a lunatic’. He was accused of ‘showing off’ while driving the car, which had been bought for him by his mother just five days before the crash. The court heard he had advertised ‘lifts cheaper than taxis’ on social media.

On the 7 March 2015, by your dangerous driving, you took the lives of two children, seriously injured two others and caused serious injuries to yourself. [Your passengers] were young and, it would appear, they were drawn by the excitement of riding round but they were too young to appreciate the risks you ran when you diced with death on a daily basis.

A mother’s version of events

But Goodwill claims that the case and McMeekin’s sentence were flawed. She told The Canary:

I think his sentence was wrong due to his long list of life threatening disabilities and the state of his mental health. He now has a very low IQ and limited understanding of words, and his memory is poor. Also, his autism is now considerably worse – and it was very complex before the accident. But during court proceedings, no regard was given to his autism or his epilepsy. Also, the CCTV footage that showed no wrongdoing on Tom’s part was not mentioned. Nor was the possibility raised that he may have suffered a seizure prior to the accident. There is no prison that can cope with Tom and provide the 24 hour acute medical care he needs, as his deterioration proves.

Goodwill’s solicitor has secured a judicial review of her son’s case. But due to the cutting of legal aid, the family are having to crowdfund to cover the legal costs. Goodwill says she hopes that, by appealing her son’s sentence, she can “get him home before it’s too late”:

Whatever happened that terrible day shouldn’t have happened. But I cant change that. Tom’s injuries and life threatening condition should be punishment enough. He was given a prison sentence not a death sentence. My son has suffered horrific injuries which threaten his life every single day. Nine months in prison has caused irreparable damage and to someone with Tom’s mental health problems nine months is like 10 years. Both prisons have proved they cannot cope with his complex medical needs.

We just want him released before he dies due to the abuse and neglect.

Goodwill and McMeekin’s story is a complex one. People could argue that the crime of death by dangerous driving is such a severe one that the only option is a prison sentence, regardless of the circumstances. But equally, should the judge not have considered McMeekin’s underlying health conditions? And while his crime and sentence are central to this story, the treatment he is receiving in prison appears wholly unacceptable.

Whether people have committed a crime or not should in no way influence the medical and psychological care they receive. Goodwill’s accusations pose serious questions for the prison service over how it treats disabled people. And McMeekin’s story merely serves to undermine the notion of prison being a place of rehabilitation.