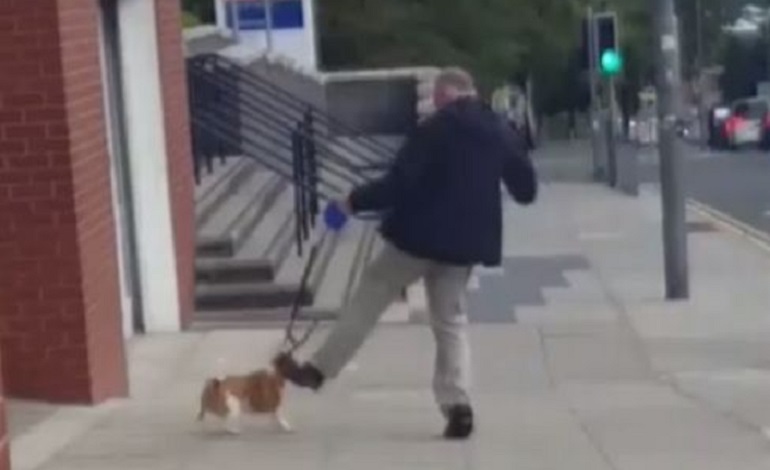 WARNING: THIS ARTICLE CONTAINS FOOTAGE THAT MAY UPSET THE READER

A video of a man’s unprovoked attack on a dog in Liverpool has prompted police to launch a major investigation. But the incident, while ending happily for the dog, poses questions over society’s attitude towards our pets, and each other.

The video shows a man kicking the Jack Russell-Corgi cross in the head, reportedly leaving blood “splattered” across the pavement. The incident occurred near Park Road Tesco, Toxteth (in Liverpool) at around 4.20pm on 16 August. But it has emerged that the dog did not legally belong to the man, with The Liverpool Echo reporting that he was supposed to be looking after it:

A witness to the incident told The Liverpool Echo:

I was walking up with my earphones in when I saw a man rag his dog off the bus, he was booting it in the side and from behind.

The dog looked terrified and was trying to escape from him, he was yanking the lead up and volleying the poor dog in the face, by this point there was blood all over the floor. I thought it was one kick away from falling to the floor and dying, at that point everyone ran over confronting the man screaming at him.

Police are still looking for the unidentified perpetrator. The dog has since been taken in by shop owner Michael Lamb, who has called him “Sconehead”.

Not to be tolerated

The RSPCA said in a statement:

We understand that the dog did not belong to the man who was filmed kicking him and already has a legal owner. The RSPCA is working with the police and everyone involved to ensure the best possible outcome for the dog. Our main priority is the dog’s welfare and we are glad to hear that he is safe.

We are pleased that there are people who are willing to stand up for animals, however we do recommend that anyone who witnesses animal cruelty contacts the police or the RSPCA and allow specially-trained officers to deal with the situation.

The RSPCA and the police are working together in investigating this incident and we want to thank everyone who has come forward with information so far. We will never tolerate this kind of cruelty towards animals.

Merseyside Police said that “no arrests have been made so far and the investigation is ongoing”. But the incident serves to highlight the UK’s problem with animal cruelty.

In March, the RSPCA released statistics on its animal cruelty work. And it said in 2016, compared to 2015, it:

The RSPCA prosecutes people under the 2006 Animal Welfare Act. And it said that most of the complaints in 2016 related to dogs (84,994), followed by cats (36,156) and equines (19,530). But the RSPCA doesn’t believe that the UK is becoming more cruel, just that people are more willing to report incidents. Assistant Director Dermot Murphy said:

I believe that the figures from [2016] show that we’re not becoming crueler, but that people are simply less willing to stand by and do nothing if they think an animal is suffering. People are increasingly likely to share images or footage on their social media accounts of animals they believe are not being cared for properly, while many will see material their friends have shared and then contact us about them.

Animal cruelty: a reflection on society

Regardless of the RSPCA reasoning behind the rise in animal cruelty cases, it’s still a major problem in the UK. And it goes some way to understanding how governments can easily get away with violating the rights of, say, disabled people. Because when some members of the public hold animals in such little regard, how can we even begin to hope they’ll show any respect to other human beings?