We need to talk about what happened on Good Morning Britain today. Because it was not OK. [VIDEO] - The Canary 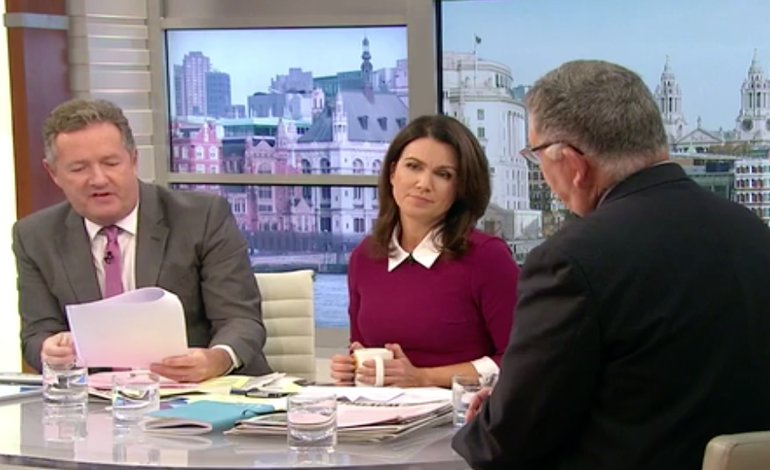 On Tuesday 5 September, ITV breakfast show Good Morning Britain interviewed a guest who claims he can ‘cure’ gay men of homosexuality. The show and the channel are under fire for creating unnecessary and potentially damaging conflict; and for zero purpose other than ratings.

The show trailed its guest early on Tuesday morning, asking viewers for their thoughts. And the response was overwhelming. BBC Breakfast producer Peter Ruddick stated that he would “resign” if the BBC attempted such a stunt on its show:

Other voices from media and civil society also joined the condemnation:

Fixed that for you pic.twitter.com/sRiNal4iGw

Thoughts? Don't give him air time. Countless lives have been lost through suicide. Being gay isn't a choice, being ignorant is #ShameOnHim

But despite the advice, the show went ahead regardless.

Comedian Julian Clary was on the couch directly after the Davidson interview, and made his views clear on the matter:

When Morgan attempted to defend the show’s decision, Clary countered:

Maybe if you talk to the gay community, you might find a faster path to happiness there rather than denial or bringing the devil into it. That’s where I have to disagree.

The interview came just one day after Piers Morgan attacked L’Oreal’s first transgender model live on air. Munroe Bergdorf was dropped by the cosmetics firm after speaking out about the white supremacist march in Charlottesville. Morgan challenged her view that white people need to own white supremacy and tackle it – or be considered complicit.

What followed was uncomfortable viewing. Morgan would ask a question. Bergdorf would provide a rational answer. Then Morgan would rant furiously at the answer he had already made up in his mind. It was disjointed and petulant. For example, when discussing sexism, Morgan quipped:

The five most powerful people in this country currently are women. How does that sit with your patriarchy?

Never mind that women are paid on average 18% less than men. And let’s forget that, in UK businesses, just 16% of senior executives are women. Plus, who even cares that Britain has fewer female judges than any other country in Europe? A few made it to the top, after all. This is the base logic of Morgan’s argument. A method of thinking that never advanced a single progressive cause in history. The logic of put up and shut up.

Unsurprisingly, Morgan took a social media battering for his behaviour. And the Davidson interview gave him a chance to refresh his liberal credentials. Because Morgan’s whole schtick these days is the ‘muscular liberal’. One minute trashing EDL thug Tommy Robinson, next minute bemoaning ‘PC’ culture. But viewers were quick to note that Morgan was making his career off the back of real pain:

While Morgan reduces the lived experience of women and LGBTQ+ people to viral rants, real people suffer. In 76 countries around the world, it is still illegal to be gay. And in 10 of those, the ‘crime’ is punishable by death. Even where progress has been made, the project for full equality is nowhere near complete. Less than a week ago in Britain, trans teen Leo Etherington killed himself after his school refused to recognise his gender identity. And Leo is not an aberration. A study by LGBTQ+ charity Pace, meanwhile, found that nearly half of all young trans people in the UK have attempted suicide.