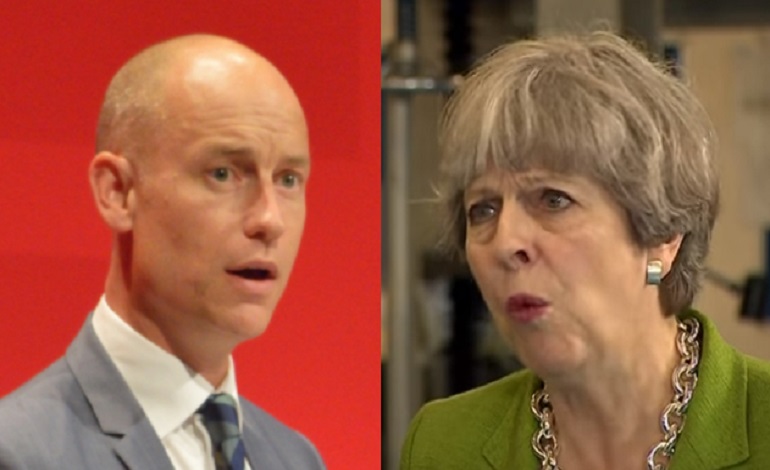 A Labour MP has stuck his head above the parapet and openly called for the tabling in parliament of a no confidence motion in the Conservative government. If it worked, it could see the Tories toppled from office, and forced into a general election; one that Jeremy Corbyn may well win.

A no confidence motion in the sitting government, if passed by a majority of MPs, leaves it with 14 days to form a new government. Otherwise, a general election is called.

Stephen Kinnock, the MP for Aberavon, called for the action in an article for The Guardian. In the opinion piece, he says:

The stark contrast between the incompetence of the Conservative party and the strength of [Labour’s] position, combined with the fact that the stakes for our country simply could not be higher, lead inevitably to the conclusion that Labour is duty-bound to table a motion of no confidence, which could read as follows:

‘That this House has no confidence in the ability of Her Majesty’s government to negotiate the terms of the UK’s withdrawal from the EU in such a way as to protect and promote the jobs, livelihoods and long-term interests of the British people’.

The motion should be tabled, debated and voted upon as soon as possible. Time is running out.

The basis of Kinnock’s argument for a no confidence motion surrounds what he calls Theresa May’s “muddle and fudge” approach to Brexit negotiations. He describes the Conservative government as “Directionless. Divided. Weak. Disliked. Distrusted.” And he slams May’s leadership as a “vacuum”, saying the election left her “utterly discredited”.

In contrast, Kinnock says of Labour under Corbyn:

Do we have a vision? Yes… Can we present a united front? Absolutely… Do we have a leader and a team around him who have the authority and credibility that are preconditions for success? Yes, without a shadow of doubt.

Could Labour sail into Number 10?

The likelihood of Labour winning a no confidence motion is debatable. Because while the Tories are propped up by the DUP in government, it is unlikely that Conservative and DUP MPs would vote against May. But with Brexit negotiations looking, as Kinnock says, “farcical”, there may be some Tories who’d be willing to gamble that forcing an election with potentially a new leader is a risk worth taking to save their party.

Also, Labour has now been ahead in the polls for over four months, with polling analysts Britain Elects saying Corbyn’s party would be the largest if a snap election was held.

And while Kinnock is focused on Brexit as a reason to oust the Tories, many people up and down the UK would have countless other grounds on which to want rid of them: Universal Credit, the treatment of disabled people, and the state of the NHS being just three. But Kinnock’s move is a bold one, that will surely have the backing of millions of people across the UK.