The Daily Mail just tried to smear Labour's Laura Pidcock. But she was having none of it. [IMAGE] - Canary 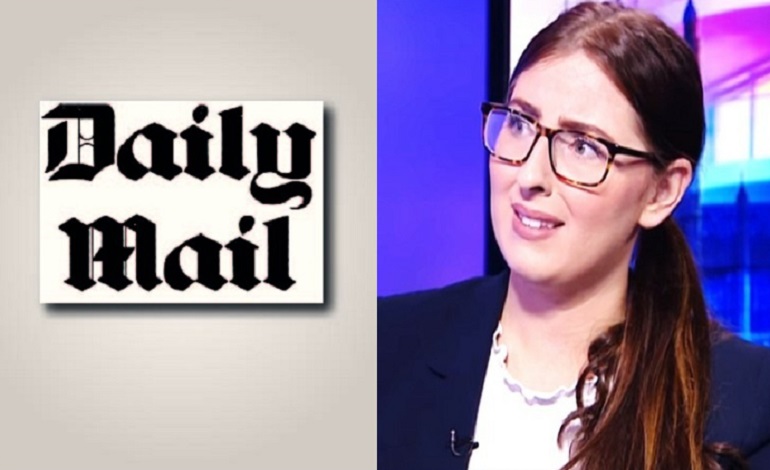 On 25 October, The Daily Mail ran an article suggesting Labour MP Laura Pidcock was a ‘hypocrite’ because she didn’t attend a debate on Universal Credit. But Pidcock was having none of it, and hit back with a scathing takedown of the right-wing tabloid.

The Mail wrote that Pidcock didn’t attend the debate on Universal Credit on 24 October because she was spotted “catching an EasyJet flight to Venice on Sunday”. The tabloid claimed that:

Laura Pidcock… was in Italy during the welfare reform emergency session. [She] was accused of hypocrisy, after her party criticised Tory Douglas Ross for missing a Universal Credit debate last week to referee a football game in Barcelona.

The Mail went on to quote Conservative MP Andrew Percy as saying:

The Mail claimed that:

She denied that she was on holiday in Venice…

And it quoted a spokesperson for Pidcock as saying:

she had missed the debate because of a ‘long-standing commitment which was cleared with the whips’.

But this was, predictably, not the whole story.

When The Daily Mail were phoning me yesterday, I declined to answer, as I didn’t want to give them the oxygen of publicity. But I do want to say some words in explanation to my constituents, because they are the only people who matter.

She went on to detail that her partner, a teacher, had bought them flights to Venice as a 30th birthday present. This was before the general election, therefore before Pidcock was even an MP. So when she was elected, she asked the Labour Party Whips for time off during half term.

She was told that it would only be granted with a few days’ notice. And it eventually was, but only on 19 October; before the Universal Credit debate was announced.

The day after I left, on Monday, I read that Debbie Abrahams had been granted an emergency debate on Universal Credit. Naturally, I was gutted not to be taking part, having made several interventions on UC [Universal Credit] in the past, and fought hard to get the Government to pause this disastrous roll out.

She concluded by saying:

To be perfectly honest, if I had known the Universal Credit debate was being tabled, I probably would not have gone either, even without there being a vote. I take my responsibilities very seriously. 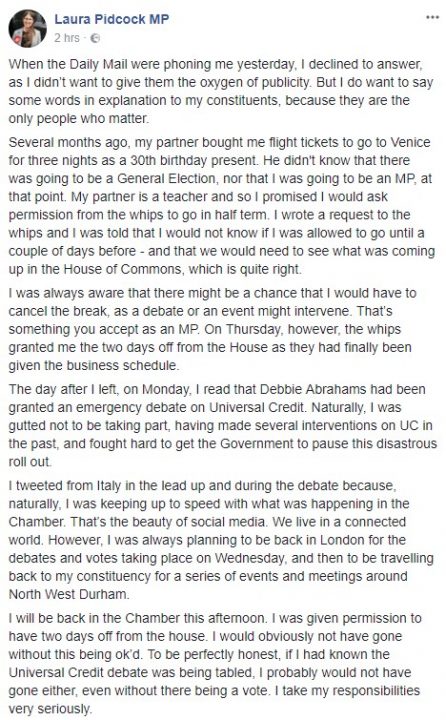 Pidcock is becoming renowned as a politician who’s not afraid to speak out about the issues that matter. And with her takedown of The Daily Mail‘s attempted smear, she’s shown she’s a politician willing to stick to her guns as well.