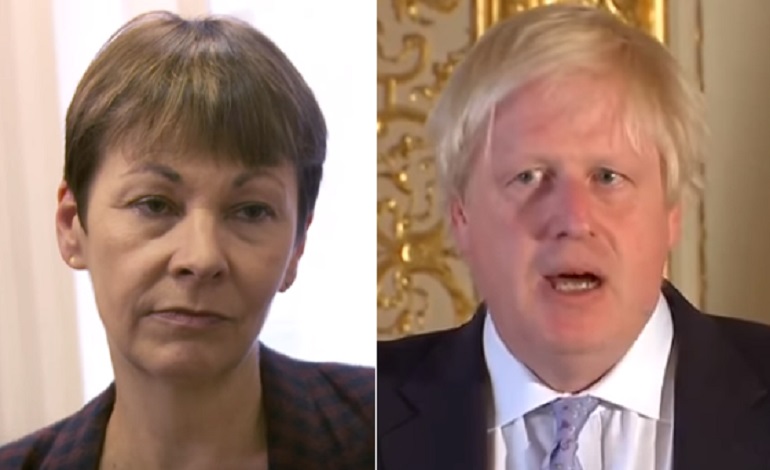 Boris Johnson has once again been hitting the headlines for all the wrong reasons. And with people calling for his resignation, Green Party co-Leader, Caroline Lucas, has given a damning assessment of the Foreign Secretary’s disastrous track record.

Iranian authorities arrested Nazanin Zaghari-Ratcliffe in April 2016 when she went to Iran with her daughter on a family holiday. Her family and employer maintain her innocence and claim she is being used as a political pawn.

But due to a misjudged comment by Johnson, Iranian authorities could extend her jail sentence.

A history of bad taste

Lucas was one of those calling for Johnson to step down, and she took to Twitter to calmly give her reasons why:

These two tweets refer to a column Johnson wrote for The Telegraph in 2002, in which he called black Africans “piccaninnies” with “watermelon smiles”. Lucas continued:

In April 2016, he said that Obama’s part-Kenyan heritage may have been the reason a bust of Winston Churchill was removed from the White House:

4) Uses his Telegraph column to cast doubt on climate change.

Not once, but at least twice, Johnson wrote about how he viewed unusual weather as nothing to do with climate change:

As a species, we human beings have become so blind with conceit and self-love that we genuinely believe that the fate of the planet is in our hands – when the reality is that everything, or almost everything, depends on the behaviour and caprice of the gigantic thermonuclear fireball [the sun] around which we revolve.

Lucas went on to note that Johnson:

This relates to Johnson saying in 2006 that the islanders of Papua New Guinea were known for their “cannibalism and chief-killing”.

Lucas then raised the issue of Hillsborough:

6) Ran a magazine which accused Liverpool fans of ‘wallowing in it’ after Hillsborough.

In 2004 when Johnson was Editor of The Spectator, it ran an article which stated that in the wake of the Hillsborough disaster, which killed 96 people, Liverpudlians:

see themselves whenever possible as victims, and resent their victim status; yet at the same time they wallow in it.

It continued by saying that the deaths of Liverpool football fans was:

no excuse for Liverpool’s failure to acknowledge, even to this day, the part played in the disaster by drunken fans at the back of the crowd who mindlessly tried to fight their way into the ground that Saturday afternoon. The police became a convenient scapegoat, and The Sun newspaper a whipping-boy for daring, albeit in a tasteless fashion, to hint at the wider causes of the incident.

Johnson has since apologised for the article.

But Lucas was not finished, and referenced this now-infamous speech at the 2017 Conservative Party conference:

7) Jokes about clearing away dead bodies in Libya to turn Sirte into the next Dubai.

She then brought it back to the current situation with Zaghari-Ratcliffe:

8) Endangers the freedom of a British citizen in Iran.

Lucas summed up by saying:

These aren't isolated errors, they're not 'gaffes'.
They are the actions of a human wrecking ball. @BorisJohnson must be sacked, now.

Lucas is firm about what she thinks of the Foreign Secretary, and her belief that he needs to go. And it’s hard not to imagine a great proportion of the British public agreeing with her.