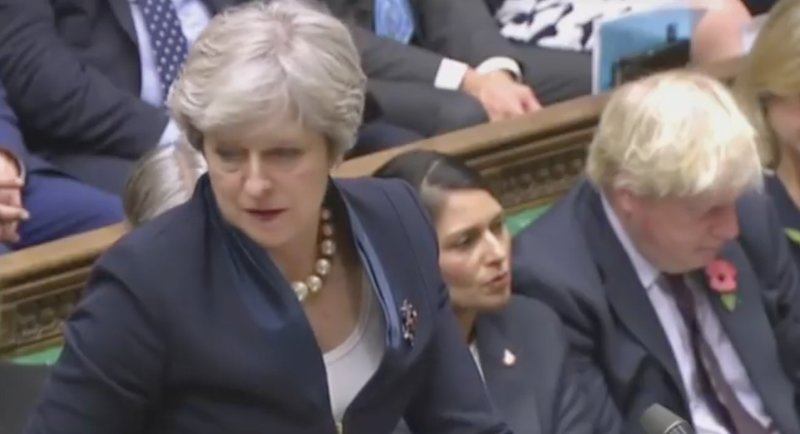 Cabinet Minister Priti Patel has held more than a dozen secret meetings with Israeli officials. A former Foreign Office official has spoken out publicly about why Patel cannot remain in government. And why Theresa May’s failure to act leaves the UK an international embarrassment.

According to LinkedIn, Nick Tolhurst spent nearly three years as an official in the Foreign and Commonwealth Office. He is now a respected consultant and author, specialising in Corporate Social Responsibility. And he has chosen to speak publicly on the Priti Patel affair.

The Prime Minister is facing four major scandals at once. The Westminster sex scandal is continuing to expose sexual predators in UK parliament. Foreign Secretary Boris Johnson’s reckless comments have likely doubled the jail sentence of a UK citizen in Iran. The Paradise Papers have revealed an epidemic of tax evasion across the media, political and royal establishment. And now Patel.

May has failed to take firm action on any of them. And that failure to act has eroded any last dregs of authority she had.

While on holiday in Israel in August, Patel attended 12 meetings with Israeli officials – including with Israeli Prime Minister Benjamin Netanyahu. She has since admitted to two further meetings on returning home to Britain. None of these meetings were ostensibly sanctioned by the UK government. They were apparently scheduled and attended without the knowledge or permission of the Foreign Office or the Prime Minister. And Downing Street has since confirmed that Patel then attempted to lobby for UK aid funding on behalf of the Israeli military. Why does any of this matter? Tolhurst explains that Patel has to all intents and purposes acted as a spy/foreign agent. She has created an unacceptable security threat to the UK government, he says. And if she remains in post, the UK government will be considered a laughing stock by foreign governments.

2/ Boris gaffe was stupid but affects just one family & hopefully won't have repercussions & can be remedied. (Why he is FM another matter)

6/ all FCO visits depend on securing/sweeping. As a individual Patel cld not do. this she was thus vulnerable to pressure/blackmail

8/ no exaggeration to say such behavior is normally classed as close to spy/becoming a foreign asset for Patel to not be removed thus…..

10/ if so this will encourage all sorts of states to replicate such policy & so to end I return to the start….

12/…essentially says it can be brought individually minister by minister & we're totally ok with that. /ends (sorry for wordy thread!)

The context is decisive

To put this in perspective, Labour shadow Foreign Secretary Emily Thornberry was sacked from Ed Miliband’s shadow front bench for a tweet considered “snobby”. And yet, instead of firing Patel, May chose to keep her at the heart of UK government.

And now it appears that days of intense public pressure have forced the Prime Minster into yet another embarrassing u-turn. May has reportedly summoned Patel home from her Africa trip for a second confrontation on the matter. Too little, too late.

– Get political locally. Join a local party and engage in democracy.