What the hell is Theresa May doing partying with the editor of The Daily Mail? [TWEETS] - The Canary 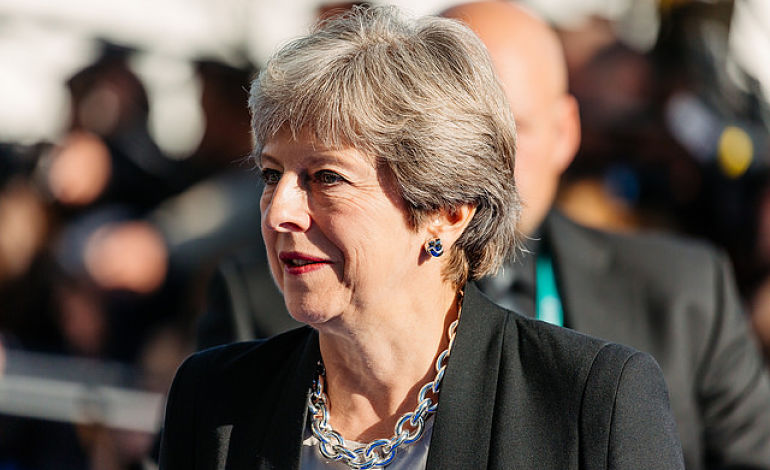 Priti Patel quit her job as International Development Secretary on 8 November. And after that “hideous day”, May decided to go to a party celebrating 25 years of Paul Dacre being The Daily Mail‘s editor.

ITV‘s Political Editor Robert Peston, tweeted this picture and announcement on the evening of 8 November:

After her hideous day, the prime minister arrives tonight for a dinner with friends – a banquet at Stationers’ Hall in the City to celebrate Paul Dacre’s 25 years as Daily Mail editor. More on News at 10 on ITV at 10 @NewsAtTen pic.twitter.com/hY6WOdsrkS

In response to the news, Twitter users shared their outrage:

Tonight the prime minister is at a party to celebrate 25 years of the rule of hate and division of Paul Dacre at the Daily Mail. They're all stuffing their faces and quaffing champagne and I feel sick to the pit of my stomach!

Some pointed out that May should have had other priorities to deal with:

As the country goes down the toilet, May swans off to attend posh dinner in ‘honour’ of dishonourable Paul Dacre, editor of the tax dodging, hate-filled Daily Mail. She has to go. pic.twitter.com/EAoPGdGSYp

If I was PM, I would not sleep until I had made sure all tower blocks had sprinklers.
And I wouldn't go to a party with Paul Dacre. https://t.co/4hR3mM8UXM

Tonight, Theresa May is at a banquet to celebrate 25 years work by the Daily Mail Editor. Yesterday, Food Bank usage hit record high.

Meanwhile, others said it was absolutely fitting that May joined Dacre’s party:

Well, after a day like that, you probably should report to your line manager.

Interesting that she was at Paul Dacre's party last night. He's probably telling her who she can and can't sack and employ. Do Dacre and Murdoch run the country I wonder.

But in all seriousness, some thought May called it wrong on this one:

I mean, there's your general 'misreading the mood of the nation' and then there's this: https://t.co/iYLKHP2m49

Dacre is a powerful media figure and his tabloid is often noted for its anti-immigration and right-wing views. It is also a clear backer of Brexit. And in 2016, a leaked email exposed the potential influence the paper had on the Conservative Party.

Links between the PM and the paper have also been close. In the first six months of her time in office, Dacre was the only media figure May hosted at 10 Downing Street with a private dinner. She also hired James Slack, The Daily Mail‘s former political editor, as her spokesperson earlier in 2017. And the tabloid endorsed May for the Conservative Party leadership in 2016 with a front-page headline arguing “why it must be Theresa”.

Judging from the social media reaction though, people are not impressed with May joining a celebration with a paper accused of using hate to push sales.

Instead, there’s plenty of unfinished business May could be dealing with. As one commentator said, her cabinet is “going down the toilet“. And it is only recently that a ‘sex pest’ scandal hit her party. What’s more, despite calls for May to sack Boris Johnson, after a damaging gaffe risked a British woman’s freedom in Iran, he still remains in post.

So, choosing to party with The Daily Mail‘s editor? May certainly called the public mood wrong on this one.