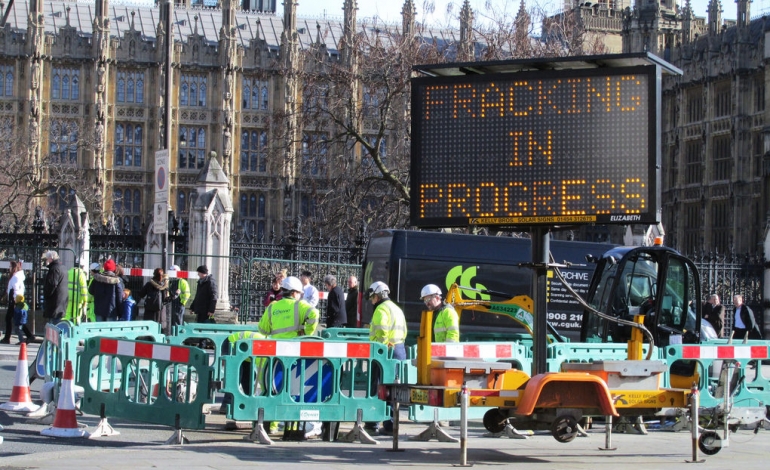 The government has published a survey, tracking public attitudes about energy and climate change. And support for fracking (hydraulic fracturing) is at an all-time low. Only 13% of those surveyed between September and October said they backed drilling for shale gas, with 36% opposing it. And what do people say the main reason for their opposition is? Respondents say they are concerned about the “loss or destruction of natural environment”. Indeed, as The Canary previously reported, England’s most cherished areas of natural beauty have been designated as potential sites for fracking.

Anti-fracking protesters continue to clash with fracking companies. But the results of this survey show that the general public is very much on the side of environmental protection.

A study published in September found that there was variation in support for fracking between UK and US residents. The authors highlight that:

This study, as well as this recent survey, also shows that a lot of people haven’t made up their minds about fracking. Study authors say there is a:

large undecided population whose views on this topic can be shaped further.

And these views can be influenced in all sorts of ways, by the government, campaigners and corporate advertising.

This latest government survey also reveals that support for renewable energy is on the rise. 82% of those surveyed now support renewables (up from 79% last year). In Scotland, wind power generated the equivalent of 189% of household demand during October. Gina Hanraha, Acting Head of Policy at WWF Scotland, argues the UK government can learn from this impressive achievement.

The government is bolstering the renewable energy industry. But it also backs fracking companies, which continue to receive pushback from local residents.

Cuadrilla accused of engaging in “bribery”

Fracking firm Cuadrilla wants to give residents in Lancashire £2,000 as compensation for living close to its fracking site. One of these residents called this “shabby behaviour”, while another said:

What we want is our health. It’s just blood money really, because no amount of money can compensate for somebody’s health being affected. You can’t buy health. Most certainly I wouldn’t take it.

These proposals are immoral and tantamount to bribery. Britain and the world is on course to miss climate targets. Kickbacks won’t keep catastrophic climate change at bay.

a minority who are intent on taking unlawful action to disrupt the movement of large vehicles to and from the well site.

But with the general population more and more against fracking, shale gas companies are likely to face even more intense challenges over their activities. If we want to tackle climate change seriously, then it seems that we have to end our reliance on fossil fuels. But the government’s response is mixed. It wants to boost the renewables industry, whilst also giving fracking the green light. This falls short of the mark. We won’t meet our climate change targets if we do some good, whilst putting profits before people in other instances. The gravity of the situation requires a consistent, concerted strategy.

– Check out more articles from The Canary on fracking.