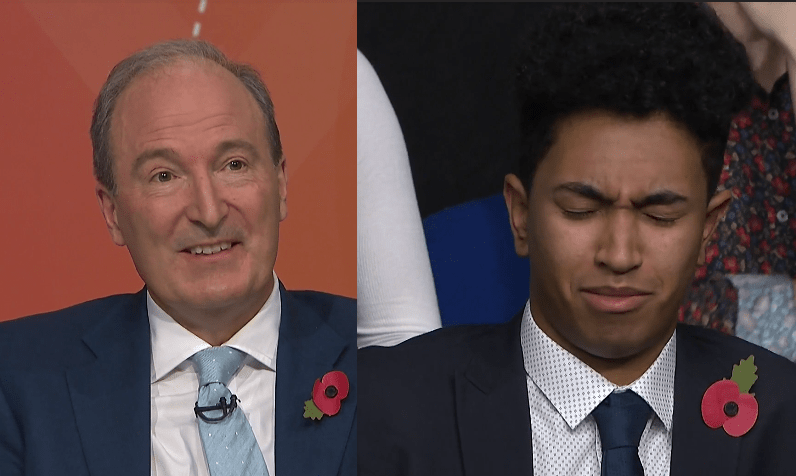 Charles Moore, the former editor of The Telegraph and The Spectator, made a revolting remark on BBC Question Time. Audience member Nathan had asked [43:24] the panel:

As a 17-year-old schoolboy, how is it that I know how to respect women better than some of our government ministers do?

‘Rape culture in a nutshell’

Moore, who still writes for both publications, said [49:23] to the young student:

It is because you don’t have power yet.

The biographer of Margaret Thatcher struggled to expand on his point as the audience groaned. At home, viewers commented that his opinion summed up “misogyny and rape culture”:

The Westminster sexual harassment scandal continues to grow. Earlier in the week, five separate allegations about prominent Conservatives came to light in the space of 48 hours. The Conservatives are reportedly “drawing up contingency plans” to fight by-elections should any MPs be forced out of parliament. Former Defence Secretary Michael Fallon has already resigned from the government after sexual assault allegations, but he remains an MP.

‘Respect of women should be a universal standard’

Expanding on his point on Question Time, Moore said [49:30]:

That is the basic problem we’re dealing with… people exploit their power, they exploit it in sexual matters… in terms of money and in terms of manipulation. Of course not all powerful people do that, but that is the temptation.

But another audience member wasn’t [52:46] about to let the opinion slide:

Nathan made a very, very important point. He said as a 17-year-old he has more respect for women than some politicians. Charles you said: “That is because you do not have power yet”. By you saying that you are insinuating that when he becomes a very powerful man he would then abuse woman, and that is not right. What we have is a culture where sexual abuse and sexual harassment towards women is accepted because men are powerful… Respect of women should be a universal standard…  If you are powerful, if you are not powerful: it does not matter. So making that statement is perpetuating a very very bad idea.

In response, Moore insisted [53:44] he agreed with the audience member and wasn’t trying to “excuse” the behaviour. But the prominent journalist’s remark sums up the mindset of abusers in positions of power everywhere: ‘if you were in my position, you’d take advantage too’. We must work together and stamp out such attitudes.

– Have conversations with the women and men in your life, and refuse to tolerate misogyny in your communities and workplaces. This starts and ends with us