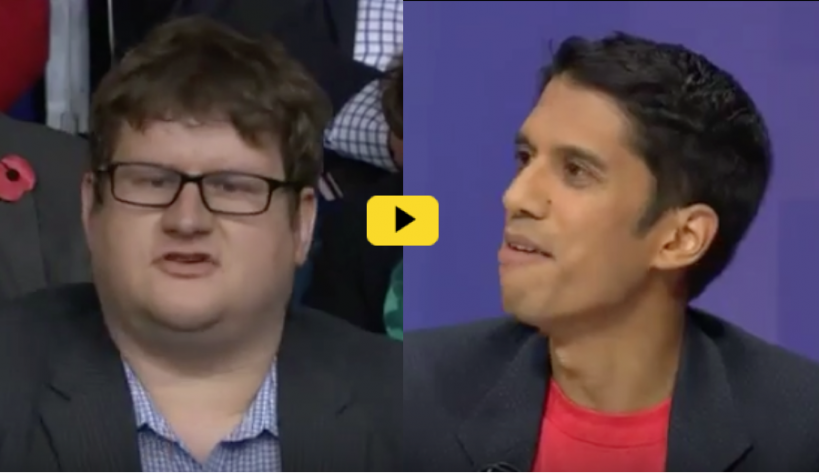 Last night’s BBC Question Time featured a major showdown between journalist Aditya Chakrabortty and a Tory councillor. But viewers noticed something a little curious in the background. It appears Labour MP Stella Creasy found some common ground with the Tory councillor.

Disabled viewers and their allies were thrilled with Chakrabortty for raising the issue of disabled people being sent “to their deaths” by Theresa May’s government. But his statement was not hyperbole. It is backed up by multiple studies; such as one by Oxford and Liverpool Universities. It found that the suicides of an “additional” 590 people were linked to the Department for Work and Pensions’ (DWP) Work Capability Assessment (WCA); as were 279,000 additional cases of mental health issues and 725,000 additional antidepressants prescriptions. And as The Canary’s Steve Topple points out:

Only in August, the Chair of the UN Committee on the Rights of Persons with Disabilities, Theresia Degener, said the UK government had created a ‘human catastrophe’ for disabled people, where society viewed them as ‘parasites, living on social benefits… and [living on] the taxes of other people’.

The DWP’s own figures show that between December 2011 and February 2014 nearly 2,400 sick and disabled people died after being found fit for work. People in the final weeks of their lives are being put through gruelling assessments. And they’re suffering the stress of not knowing if, or when, their financial lifeline will be stripped away.

Finally! @chakrabortty speaking a truth about disabled people dying because of Govt policies that Tory voters do not want to hear #bbcqt pic.twitter.com/FwY7qSDwvz

Despite being entirely correct, Chakrabortty faced jeering from the audience and dark looks from his fellow panelists. He was then denounced as talking “inflammatory rubbish” by a Tory councillor in the audience.

But perhaps the most surprising reaction came from Labour MP Stella Creasy, who gave Chakrabortty a contemptuous shake of the head. And her reaction did not go unnoticed by viewers.

Centrist Dad Stella Creasy rolls her eyes in disgust at the suggestion that disabled people are dying because of the Tories. #bbcqt https://t.co/GG1EUy6dyu

What amazed me was how incredulous stella creasy & justine greening looked. Surely they must both know the deaths are happening & if they don't, they damn well should! Ignorance of politicans, wilfull or otherwise, on both sides of the house is unacceptable #bbcqt

It's pretty sad that any @UKLabour MP, albeit some Blue Labour type @stellacreasy colludes in the whitewashing of the immoral, unethical and downright criminal behavior of this governent towards sick and disabled people. That reaction to @chakrabortty was widely noticed. #bbcqt

Creasy is a stellar advocate on women’s rights, but that advocacy has to stand when it clashes with austerity and disability, or it means nothing for swathes of women at the sharp end of both. And with John McDonnell’s promise to bring disabled people into government with a Labour win at the the next election, Creasy needs to get with the programme – fast.